Getting snippy on the High Street

There's an interesting counter to the gloomy story of the 'inevitable' decline on the British High St. While some of the big chain stores have faltered and closed, usually due to mis-management, shops dealing in personal services and non-alcoholic meet-up spaces appear to be doing well:

"Barbers, beauty salons, shoe repairs, ice cream parlours and coffee shops were among the retail sectors to see increases in shops opening in the first half of 2018, according to retail intelligence business the Local Data Company."

Some shops like this are combining their sales, such as the vintage barber at Vagabond's in Stoke-on-Trent who offers a vintage beer option with every haircut. Presumably there's also a nice ginger beer on offer in the chiller, for those who don't drink. What else could be sold to the older gent, that they can't get more easily on eBay on Amazon and through the letter-box, and which wouldn't get the shop in 'change of use' trouble re: the planning and zoning regulations? Walking sticks and suchlike are out of the question. True, you wouldn't want to get a walking stick through the post, but at the same time they take up space, are awkward to display, and would sell only rarely. Collapsible seat-bearing 'flipsticks' might be another matter, since one would only need to have one display-model out front. These enable one to have a sit and a breather when walking, even if no seating is around or it's only a bum-numbing mesh-grid, or the metal-box type now plonked around the centre of Hanley. If not needed for carrying or sitting, they can be slipped into a bag. 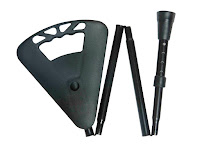 But such things are not an ongoing regular purchase. Once thirty of your regulars have them, you're not likely to sell many more. Perhaps a curated little rack of difficult-to-find print magazines, with nostalgia value? The small Commando booklet-comics, perhaps. What bloke of a certain age wouldn't be tempted to try one of those, from a rack displaying titles guaranteed by the barber to have a combo of the best art and the best writing. Once they'd read a classic such as The Long Chase, they'd be wanting more. The publishers of Commando might even offer barber shops their own little fold-and-slot stand of classic titles, that could hang on a wall. Each purchased copy would have a voucher inside with a discounted year's subscription and a flyer for The Oldie. The barber would be given a small commission for each subscription taken out, for either title. That might not be for all such barbers, of course, and many will have a clientele more interesting in sports, fishing and gardening. And selling to older men is generally difficult, which is why the high street is so geared to other market segments. But that leaves a gap which is not being catered for, and ideas such as those above show how barbers might 'up their game' in terms of repeat-sales of 'small pleasures', and how these might then be leveraged into bigger purchases such as annual subscriptions.
Posted by Digger at Friday, November 09, 2018