Well, well... the big blue Boris landslide actually happened, as predicted by the early YouGov polls. It was the later 'hung Parliament' / 'narrow victory' polls that were astray, albeit in a very useful way — because they helped get the Conservative vote out on a cold wet day in winter. Staffordshire and Stoke is now pure blue: 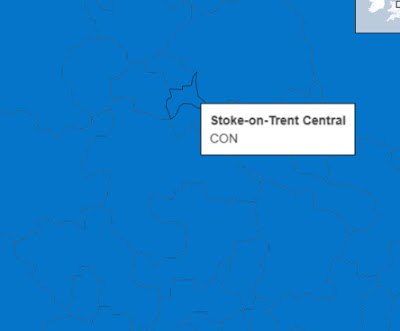 It's a fine result for Stoke, as we now have three MPs working with the government rather than sniping at it vainly from the sidelines. Congratulations to all concerned, including poor old Nigel Farage. Without Farage we'd have neither Brexit nor Boris. It was Farage standing up his Brexit Party that forced the Conservatives to elect Boris as leader, something they'd never have done otherwise. Still, I hear that Farage is now off to do the vital job of helping to re-elect President Trump, so that's a good result too. Even places down in South Staffordshire, like Dudley and both sides of West Bromwich and big chunks of Wolverhampton, have gone Conservative. Which would have been utterly unimaginable just a few years ago. But then... so was the idea that Stoke-on-Trent would be Conservative at both the City Council and MP level by 2020. And yet, here we are. Blue through and through. Which means that our Brexit will be done and dusted by the early Spring, bar some annoying elongated exit periods forced on us by the deal. All the defector MPs lost their seats, along with Labour MPs who voted to stop Brexit. Hopefully all those who have been afflicted with Brexit Derangement Syndrome will now wake up from their zombification, and perhaps even be able start some healing by the springtime. Nice side-effects of Boris's victory are that (despite some strange moaning today) the monster of Scottish independence will likely sink once again into the gloomy depths of Loch Ness, and Northern Ireland appears to have been put back in its box. Another bonus is that there will likely be "a Brexit bounce" in the economy from January to September 2020. As pent up investment and development, slowed or put on hold for all those miserable pre-Brexit years, will come pouring through and surge into the economy. It may even be that the new government will have to be careful not to let the economy overheat, especially as the deals with the USA and Australia and the Commonwealth take effect. Online freelancers in particular will want to start reducing their costs / boosting their income now, in anticipation of a double-whammy of changed $-£ exchange rates and increased mortgage rates by Autumn 2020. Let's hope that once Brexit and Scotland and other matters are out of the way, the Conservative government can rise to the challenge rather than slump into complacency and a 'lurch to the bland'. Showing that they can tackle the real issues: crime and grime and policing, tax reform, transport and roads, doctors, housing, free speech in the arts and education, beautifying our towns and cities, and more. Maybe they'll even finally get around to doing something about litter, graffiti and untrained dogs. Now that really would be a Conservative victory.
Posted by Digger at Friday, December 13, 2019