Weather: a cool start to the day, but sunny. Light SW wind. Entering a period of dry weather, that looks like the start of an 'Indian Summer'?

Up to the plot to haul away another "big bag of o' swag" and to tidy up a bit ready for the coming Open Day.

I hoed the plot, sprayed more weedkiller on the path, and hacked back one of the courgettes to prevent them overgrowing the rhubarb I'm trying to establish in a corner. Only a couple of new smaller courgettes have emerged, so obviously the plants are happy to put their energy into growing mega-marrows. Still a few flowers on the best of the courgettes... 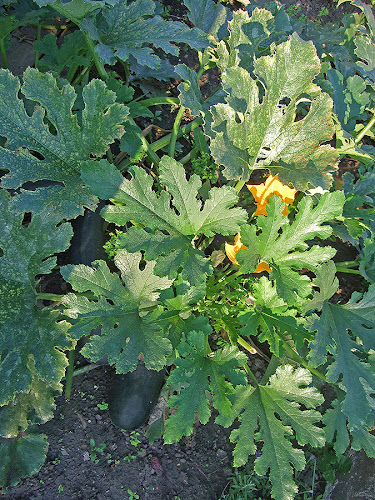 Still, I bagged three nice big chunky courgettes/mini-marrows, which should be good for about five curries.

About 7lbs of potatoes were lifted from three plants, and there are still plenty more to go.

I cut a big bundle of perpetual spinach, three of the red onions, and a small cut of chives, to perk up a curry.

A lot of apples too, which are now much more edible than there were last time. I scrumped two while I was there.

Half the remaining broad bean pods had turned black, but I still got a decent bagful. Delicious as they are fresh, the broad beans haven't really been successful for me. In that I've probably not had much more from two fairly short rows than I could have got in a £1.50 bag of frozen broad beans from Sainsbury's, so I have actually lost money on them.

And I found out that my neighbour has finally been evicted, after doing very little to her plot for two years. It's a big jungle of weeds at present, and the large wooden greenhouse needs some serious repairs to roof and windows. But I'll hopefully be getting a new neighbour in September-ish, who'll clear it off and start doing something with it.