Re: the geothermal power proposal for Stoke-on-Trent, for which funding has reportedly now been secured.

The report's mentions of Staffordshire: zero.

The report's mentions of Stoke-on-Trent: zero. 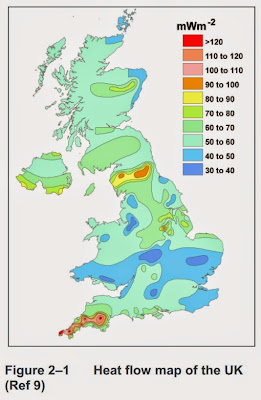 Indeed, according to the map we are remarkably chilly (blue is cooler, red is hotter), compared to other parts of the UK. So far as I can see the hope of 'hot rocks' rests on a set of linked assumptions, assumptions that the government report above doesn't seem to place much faith in. Certainly not enough to put Stoke on the map.

The story behind these assumptions starts back in 1920. In 1920–21 the Apedale No.2 Borehole was sunk to 1294m (0.8 miles) under the influence of Sir John Cadman, near Stage 8 at Apedale colliery, three miles west of Stoke-on-Trent. The site owner was apparently seeking oil. Instead he was disappointed, finding under the coal only an "at least 840m thick" layer of useless volcanic rock (called 'tuff' by geologists)...

"Apedale No.2 Borehole, drilled almost on the peak of the Apedale anomaly, proved over 840m of volcanic rocks buried by less than 450m of sedimentary rocks." — Geology of the country around Stoke-on-Trent (1998).

The Quarterly Journal of the Geological Society of London stated of the Apedale borehole that it...

"encountered an exceptional thickness of igneous rock, indicating either that it had entered a volcanic neck or that it had crossed the axial plane and was in steep-dipping lavas or ash beds"

So a possible volcanic cone neck. But no certainty.

It was later "postulated" by a geology paper for the local geological society that Apedale was thus the cone of the ancient volcano that had produced the "tuff", and that its volcanic rocks might extend out to the east under Stoke-on-Trent... 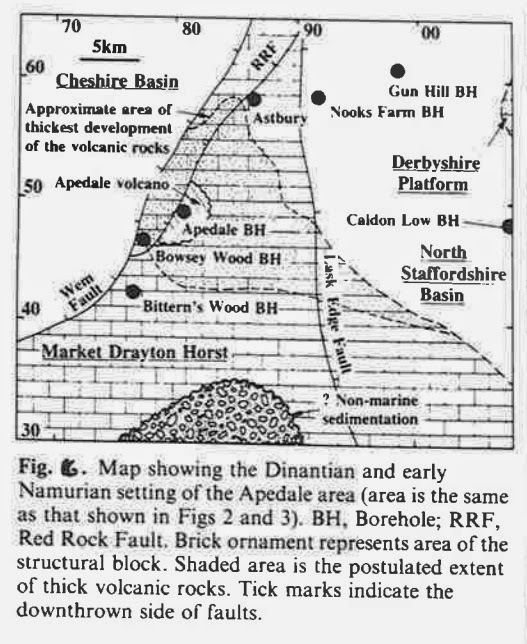 So far as I can find no-one has ever followed up this "postulation" (a guess, in plain English) with actual test boreholes in Stoke. Even the deepest coal mines seem never to have discovered what lay below the lowest coal line in Stoke. But the age of these volcanic "Apedale tuffs" rocks is congruent with what's been mooted in the press about the current geothermal project, with talk about a "350 million year old" volcano under Stoke. Actually the cone may have been three miles west of Stoke, rather than under the city — but that's beside the point.

The proposers of the current plan then appear to assume that these volcanic rocks might, perhaps, still be more than naturally radioactive in some way. Unnamed "unstable isotopes" have been vaguely mentioned in the press by Prof Peter Styles, a geophysicist at Keele University. It's then suggested that this radioactivity might be what causes the flooded mines in Stoke to be hot. There is said to be "hot water at 800-1000m in centre of city" in flooded mines (Stoke-on-Trent PLEEC Energy Efficiency Strategy - Stakeholder Workshop 1 document).

How hot, exactly? The council document City Systems Integration: A Feasibility Study for the Technology Strategy Board mentioned the "40° C water of the flooded mines at depths of 600m beneath the city". The BBC reported in June 2012 that Prof Peter Styles — who it said was the one "who suggested the [whole] idea to the council" — claimed that the water temperatures could get up to "43°C in some places" in the North Staffordshire coal field. That does seem to be hotter than normal (mines are always warm, and get warmer as you go deeper). Though I haven't been able to find out for certain exactly how or when or where this mine water temperature was measured. Given the depths mentioned, the measurements could have been from the Hanley Deep mine (now Central Forest Park), whose deepest shafts went to 880 yards (800m) and were dug and in use circa 1901-1970s.

But the matter is complicated because the Hanley Deep, along with the nearby Sneyd Colliery was later "connected underground to the refurbished Wolstanton Colliery in 1962" and was pumped from there. The idea was to run all three mines through one pithead at Wolstanton, to save money. This plan was accompanied by a huge underground reconstruction under Stoke-on-Trent that spanned the years 1951 to 1975. The deepest the combined and expanded Wolstanton ever achieved appears to have been 3750ft (1140m or 1.14km), and presumably the Coal Board took readings of the water temperatures at the time. All of the shafts in this mega-pit flooded in 1986 after the pumps were turned off. Given the depth at which Wolstanton was still finding coal, one wonders where the volcanic tuffs were? Presumably further down, perhaps dipping down and away from the high volcano cone at Apedale and thus buried somewhere toward the 2km level — if there was a volvano at Apedale and if its lava flow ever reached Stoke, and then escaped being washed away by some sea in the intervening 350 million years.

But the site of the proposed geothermal power plant suggests a backstop option, one nearer the surface. According to the planning maps the power plant will be on the far Etruria side of Festival Park. Right next to the planned Wolstanton road bridge over the A500, just north of the point at which the new road is to touchdown on Festival Park. So presumably that means the geothermal pipe could go down from there into the old Grange coal mine area. The Grange was used as a dump for "pumping water" from 1917 to 1937, after the Grange mine itself was abandoned to total flooding in 1917. Specifically, after 1917 it was remembered as having been "used as a pumping pit" to take the water out of the 470ft (173m) deep "Racecourse Pits at Etruria" (Mr. W. Jack, Norton-in-the-Moors, who gave information in 1959 for the A History of the County of Stafford, 1963). If going for such an easier mine water option, what if the heat in the depths of the Hanley Deep simply isn't present in the presumably shallower Grange mine? Or is there a fallback intention to put a pipe into some long-forgotten deep hot shaft of the Hanley Deep, which might strike out from Forest Park and run directly under that particular spot at Festival Park? In the absence of a map of the final 1970s layout of the Wolstanton / Hanley Deep shafts and tunnels it's difficult to tell.

But I imagine that the greener option for Stoke's geothermal — compared to pumping up highly polluted mine water and hoping it doesn't ever leak into the city — will be to try to tap the deeper "tuff" hot rocks that may exist far under the old mines. Certainly the hazy press reports make it seem that way, now that methane extraction from the mines has been ruled out on cost grounds. Perhaps all the options will be tried, since I guess it's as cheap to drill a three step borehole (Grange mines to 300m? / Hanley Deep mines to 800m? / "hot rocks" to 1.5-2km?) and see what comes up from the probes and cameras at each step, once you have the drilling rigs up and the engineers on site. Rather than go hell-for-leather for the 2km level. The borehole itself is presumably a fairly low cost and low-risk endeavor, with the bulk of the £50m only being committed later to the district heat network of pipes, if the borehole discoveries justify the investment. On that basis the government's backing is presumably not: "You're definitely on top of a volcano, so we're backing you" but rather "Well... if you can prove it's down there, then you're guaranteed the core funding".

So if the new Council offices in Hanley are "build it and they will come" then the proposed geothermal borehole seems to be "drill it, and see". That seems to be true of the hope for hot rocks and for hot deep mine water. Nice if it all happens, and if it does then I'll celebrate along with everyone else. But it looks to me like we won't actually know if the volcano theory is correct until the borehole drill-bit cuts through the millstone grit and drops into whatever is down there under Stoke's coal. Hopefully it won't be a live volcano.