Where to buy a good litter pick up stick in Stoke

Back before Christmas I was lucky enough to get a wonderful litter pick-up stick/tool for just £1, at Home Bargains in Stafford. A very nice little bargain, and it proved excellent for litter picking. Sadly I broke it early this week, trying to force it to open up just a bit too far around one of those super-fat plastic cider bottles. Something plastic and fragile inside went backwards, then went ping! — and the stick was totally dead.

So, time for a new stick. Amazon UK have them by mail-order of course, but I really didn't want all the hassle of a courier delivery. Especially for a low value purchase. So I needed to find one locally in Stoke-on-Trent.

* Home Bargains's website showed that they had long ago sold out, and no longer sold any litter or pick-up sticks.

* None of the other Poundland and Poundstretcher type stores had any, according to their websites.

* B&M, Festival Park. A few weeks ago I had been all around their Festival Park store, looking for something else, and hadn't seen any. A quick look at their website confirmed that.

* The Homebase DIY store in Wolstanton doesn't appear to sell them.

* Wickes don't appear to sell them.

* Morrisons, even in their rather useful new mini gardening section? No.

* Trentham Garden Centre? Doesn't appear to have a website that lists their stock. I presume it must be a proper garden centre, with just plants sold in there?

* Stoke-on-Trent City Council? Nope, no mention of their selling subsidised litter-pick kits to community groups, or giving them away for free to citizen volunteers.

* B&Q, Festival Park. B&Q's website reported them in stock, at £5.99 and £11.99 for a more expensive version. But after searching the B&Q store at Festival Park high and low, I was told that that both the cheap and expensive types had been "sent back" because they were "taking up too much room". One would think that, in a massive warehouse plus a garden-centre yard, they might have found a space for them somewhere. I suspect that was just the polite way of implying: 'No-one in Stoke can be bothered to pick up litter, they just weren't selling...'.

* Argos, Festival Park: They only offered a sort of picker-up stick for old people needing to pick up the TV remote, with the aid of two Dalek-like suckers. But it was vastly over-priced at £11.99 and out-of-stock anyway.

* Wilko, Hanley: Wilko Garden Pick up Tool at £7. But would Wilko have them in stock? Their website didn't offer an in-stock check. Plus, the stick looked a little shortish, was cheap looking and presumably made in China — I found that Alibaba.com has identical ones for about 85p each, if you import 200 to 500 of them direct from China. After having one cheapo stick break, I was wary of buying another.

* Ableworld, near Hanley. Ableworld's Classic Long at £7.19 was much more like it. It looked very similar what's said to be the best UK litterpicker, the Helping Hand Litterpicker 80cm at £14.99, just with not so much space between the pincers and yellow colouring rather than red. Yet Ableworld's was 2cm longer than the Helping Hand. That had to be worth a trek along the Cauldon Canal and down to 430 Leek Road, Hanley on the bicycle to investigate. (Note that Google Maps/StreetView's map pin is astray on this address, the Ableworld shop is actually up by the hideously busy traffic island).

Ableworld had two of the Classic Long left in stock. A nylon cord, rather than a stress-prone plastic rod, is used to connect the handle with the jaws. I bought one. A bargain, and British-made too. Underneath it actually had a "Helping Hand" logo, so it's a rebranded Helping Hand anyway. But at half the price of the Helping Hand Litterpicker on Amazon! An hour of litter-picking on the estate later, it had proved its worth. The only thing its smaller jaws couldn't handle was a really heavy thick glass 12" tall Shloer-type bottle with some water in it. Nor was it great on grabbing a closed-up styrofoam clam-shell burger-case. On everything else it was fine, having a full pincer grasp that's about the size of a typical can of Heinz soup, and more than enough to grasp cheap rot-gut beer cans and Coke cans. It's also good for fine work too, able to pick up cotton-bud sticks for instance. 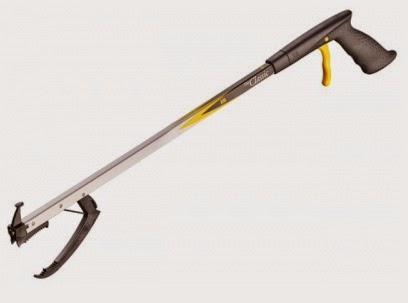 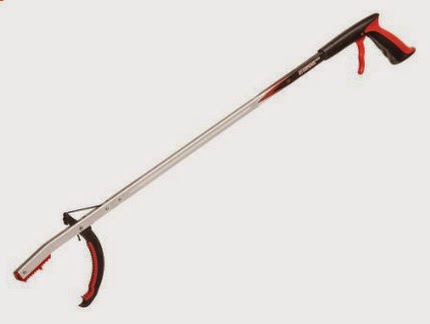 So, in conclusion: if you want a good litter-picker stick for only 20p more than the Chinese made one in Wilko, then pop down to Ableworld. Note that you may want to cut off the hook on the end, if you find it snags in the bin-bag plastic too much. I didn't find that a problem, but if you're digging into brambles and hedges you'll probably want it off. The 84cm size is right for a grown man of average height, in boots.

Ableworld also had some other types of reacher / pick up sticks in stock, including a short folding version of the Classic at about the same price, which looked like it would be good for putting in a camping bag or rambling rucksack, or for giving to kids in middle childhood / the early teenage years.

A quick update for later readers. The purchase has proved to be of enduring make and is still going strong at summer 2019.