"The State of Staffordshire's Nature" report

"The State of Staffordshire's Nature" report has just been published (PDF). It's a useful and nicely formatted overview, but it's really difficult to find recent hard trends in it. A lot of the sections open with comments like "county-level data is not available" and "it is not possible to provide trends" for the county. Even something that seems clear at first glance, like the Staffordshire Mammals Table shown below, turns out to be based on "limited knowledge"... 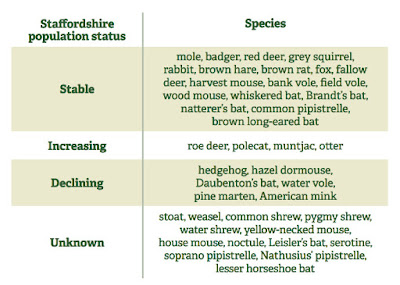 That's not the Trust's fault, of course, it's just a by-product of the lack of funding.

Some of the Staffordshire-specific highlights I noticed...

* Only 2% of Sites of Special Scientific Interest, the most important and monitored sites in Staffordshire, are classed as "declining".

* Frogs and most types of newt are common, sometimes very common, contrary to popular belief in their rarity. Staffordshire's eels are also doing rather well, another species one might have assumed was rare.

* Otter numbers are increasing after being thought "absent" in the 1980s, despite the fact that "46% of waterbodies are classed as either in Poor of Bad overall status". ("Waterbodies" are not the same as "watercourses", of course).

* As a whole the county has very slightly more woodland cover (approx. 9%) than the average in England. Just under 15,000 acres in Staffordshire is registered as ancient woodland.

* It seems to be a mixed picture on habitats. Many new habitats are being created from scratch, albeit often rather small ones. Farm management is a lot better than it was in the 1970s and 80s, and leaving the straitjacket of the EU may open up new options to promote wildlife on farms. Lowland heath seems to be being much better managed than before. But management of large woodlands declined sharply in the 1990s and 2000s under Labour, and it seems that our woodlands are still recovering from that neglect.

* As is well known, a few flagship species are having major ongoing problems — such as: honey bees; hedgehogs; water voles; native crayfish.

* Anything that lives in a niche appears to be possibly at risk through habitat loss or degradation, while adaptable 'generalist' species are likely to thrive.

There's a useful two page summary at the end, outlining what needs to be done.

It would have been interesting to see a table listing the exact causes of decline for that 2% of SSSI sites. If only to get Staffordshire's farmers 'off the hook', since many among the public will casually assume that such SSSI sites get damaged or destroyed by grumpy farmers.

Big new long-term surveys seem to be desperately needed. I wonder if they've looked into a big rolling endowment fund, built up from bequests in wills?

The report's Invertebrates page is annoyingly vague at one point, stating "some species have increased in abundance and/or population size or have colonised the county" but not saying which species.

It seems a pity for the report to have lost a focus on "trees" — often much-loved by the public — by lumping them in with "woodlands". I would have had a separate page for free-standing, garden and park trees. There the ongoing impact of specific tree diseases could have been properly summarised, and the real impact of the various tree-planting schemes addressed.

I would also have had a separate "Invasive Species and Rats" page. Also a page on county trends in "Pollution and Litter", re: impacts on local wildlife. Invasive species and pollution must be especially well documented, and also major threats, surely? As such it seems they should have more prominence in the report.

For the city of Stoke-on-Trent the report suggests there needs to be: dedicated wildlife corridors (especially important for the new Wolstanton-to-Festival Park flyover, I'd suggest); more ponds (of course); and we need to improve polluted streams (exemplified by the highly polluted Trent-bound Fowlea, which has silently shamed the Etruria Valley for decades now). [Update: I've been reminded that there is some low-key work quietly going on to make the Fowlea cleaner, so kudos to the people doing that...]