The Stoke-on-Trent results are all declared

A turnout of 57% in my own Stoke Central, for the predictable Labour hold.

Looking at the basic figures it seems that local former-UKIP voters steeled themselves to make an unexpected last-minute surge for the local Conservative candidate. Good for them, for making up their minds. But even the combined UKIP + Conservative vote just wasn't enough to defeat Labour in Stoke Central. My first guess, looking at the raw local results (above), is that this must have been because of the big surge in turnout. The Stoke Central vote as a whole was up by nearly 12,000 votes from the by-election (21,200 votes then, 33,145 votes yesterday), and it looks like a big chunk of that increased vote must have been for Labour. There seems to have been some sort of tightly organised 'youth surge' nationally, aided by the claim that Labour would scrap their university tuition fees. This was specially effective in university seats such as Stoke Central, and actually caused the semi-mythical youth vote to materialise for Labour for once. There was better weather here, too. I suspect that both factors have strongly helped Labour in Stoke Central. Also as I expected, Labour have held Stoke North, where a very similar UKIP shift + Labour turnout combination occurred. Most of the surrounding seats have announced and are Conservative as expected, including Stafford. Stoke is the red bit in the centre of the map... 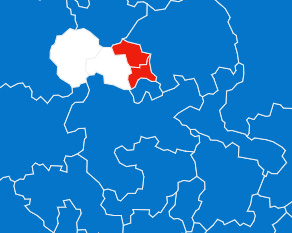 But the Conservatives have taken Stoke South, so congratulations to our new MP for the city — Jack Brereton. Nationally, about a third of UKIP-ers seem to have gone back to Labour. On current form at 5.30am it seems we may be headed for a Conservative government propped up by Unionists MPs in Northern Ireland, with a new PM in the next few weeks. The bookies favourite is currently said to be Boris Johnson for PM. I'd imagine that Gove will probably also make a return, though probably not as a PM candidate. One bright spot is that in Scotland the SNP has been badly weakened, both in terms of leadership and Westminster MP numbers, and so it seems that demands for a second Scottish Independence referendum will now be far more muted if not impossible. That may help matters somewhat, re: Brexit.
Posted by Digger at Friday, June 09, 2017