Taking a train to Newcastle-under-Lyme?

An interesting announcement today of a feasibility study on re-connecting Newcastle-under-Lyme to the rail system. That's dependent on the Conservative candidate winning, but that happy event seems fairly likely next Thursday.

Ideally there would be a sensibly connected Leek - Stoke - Keele - Crewe line. Connecting Leek to Stoke is reported to be fairly easy, since there's an existing disused line in a fairly good state. A series of feasibility studies have suggested some freight demand could make it viable in terms of the costs. It's all gone a bit quiet in the last few years, on that. But presumably it can be done if the will is there. It's currently ridiculous that a bus from Stoke station can take over an hour to get to Leek. The same goes for the time to get from Stoke station - Keele campus by bus.

Less certain is the Stoke to Newcastle-under-Lyme disused line (the Market Drayton line) which was allowed to become very badly fragmented in the Potteries, and there's an awkward gap which you can see below on my overlaid OS map. Still, a feasibility study for a Newcastle-under-Lyme station wouldn't have to consider the gap-to-Stoke all that closely. Judging by the map the route of the old line looks much less fragmented to the west of Newcastle-under-Lyme. Below is my basic tracing of the disused and partly-used lines concerned. You can see the awkward gap once the line is out of Stoke, into a section which is all built up now. 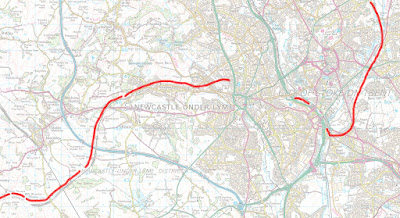 In terms of connecting Newcastle with Stoke, how would a restored line get from the siding-spur at Cliffe Vale (still used by clay trains from Cornwall) out across the A500 to connect with the line-end at Newcastle? That is going to be a real puzzle at some point in the future. A tram-line up the steep Shelton Old Road? A series of (expensive) tunnels? Or could the need for a rail connection be made redundant by a new robo-cars-only free-way lane on the roads?