There's a new Land Cover Atlas of the United Kingdom which goes into great detail for the whole UK. 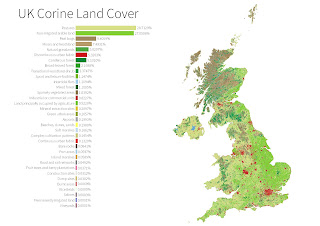 Interesting to see how much green space the UK has, in terms of the fevered debate currently going on about "paving the countyside with houses". Although looking at Stoke it seems the map becomes somewhat imprecise in urban areas. 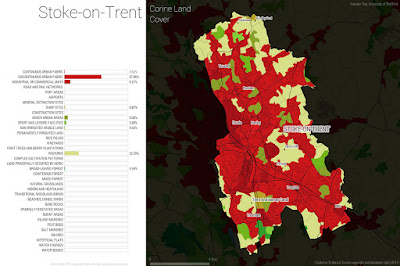 For instance Hartshill Park, Hanley Cemetery and the Trent & Mersey canal corridor are all erroneously deemed to be red or deep red splotches of mere "Urban Fabric". The map also appears to have missed the green wooded half of Festival Park, though it has picked up the "pasture" bits. Presumably because that's the bit that Stoke Council has GIS data for, as their men have to mow it (and the adjacent Grange and Rogerson's Meadow) occasionally, while the other bit is privately and generously maintained at the expense of St. Modwen.
Posted by Digger at Thursday, November 09, 2017