Where did all the flocks of small birds go in the 1990s and 2000s, that had been so abundant in the 1970s? Well, it might have been the legacy of 1980s pesticides and the diminution of hedge and meadow habitats. But it may also have been partly that we were no longer giving millions of them a rich milky breakfast each morning, after they had pecked their way through the foil tops on doorstep milk-bottles. 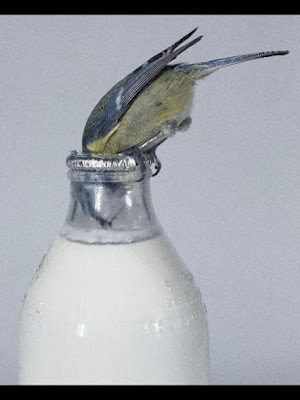 This used to be a very common thing, up until the nationwide move to supermaket carton-milk and the stopping of doorstep 'milkman' deliveries of bottles with foil tops.
Posted by Digger at Wednesday, March 24, 2021

Email ThisBlogThis!Share to TwitterShare to FacebookShare to Pinterest
Labels: Wildlife