It's seems we're still waiting for the Green election manifesto, but in the meantime Lord Heseltine issues a manifesto for gardening (£). The bulk of his speech is at Horticulture Week magazine for free.

"If I had been elected earlier this month to one of the new mayoral authorities – a job in my view more exciting and powerful than half the Cabinet – I would have established an effective coordinating body to tackle the challenges of the deprived communities. That is where you will find the truly forgotten people of our time. The challenges of such concentrated deprivation – unemployment, lack of skills, low education attainment, obesity, loneliness and mental health issues - all focus on the question how do you help people feel a sense of purpose, an interest in what their life holds. "There are no simple answers to complex questions but gardening can play a part. Derelict land is all too present. Provide them with the tools to plant it. If they plant it they may feel a pride in what they did. They may wish to defend it, even extend it. The work requires little skill but it offers ladders. If a person starts by tidying the garden of an elderly pensioner, there is a short journey to a full time job with elderly folk willing to pay someone to do the same in nearby more prosperous suburbs."

Heseltine may have been wrong on many things, including Brexit, but over the decades he's been right about new gardens and parks in cities. For instance he was responsible for getting the Garden Festival programme under-way and into Stoke-on-Trent in the mid 1980s, along with a local Conservative councillor (yes, Stoke had such people even in the heyday of Mrs Thatcher). Stoke's National Garden Festival is generally credited with kick-starting Stoke's slow multi-decade regeneration of our industrial landscape, following the global collapse of the heavy industries in the mid 1980s. These days it can be difficult to imagine what the now mostly-greened landscape of the Etruria Valley looked like before its intensive restoration. I also like his wider idea that horticulture in general could be built up much further, becoming a major post-Brexit industry for the UK. It's what we know and what we're good at. As a nation we like planting things, watching them grow, seeing how they turn out, then planning further ahead and unselfishly planting things which will only benefit future generations. Add to that spirit our advanced bio-science, landscape design, ecology research services, green architecture, and all the thousand other green niches we're excellent at. Then factor in the thousands of new gardens and parks which communities will want to build, once they have direct control of the wealth of local payments that will flow from fracking. Plus there's the millions of new market gardens that will be built in Africa, by the coming billions of population there — offering all sorts of opportunities for overseas advice and supplies. More locally, I see that the leftist Green Party has already 'lost' their election deposits. They only raised £230 of the £750 target they needed to pay their deposits. The £750 campaign closed today, still at £230. Their page now claims that £230 was all they were seeking. 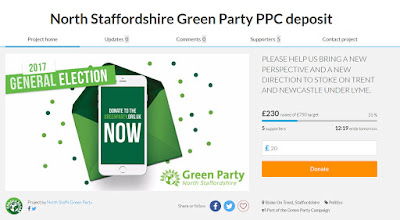