General Election: is Stoke set to be the last red pimple on a big blue map?

It's no time for victory dances, with just ten days to go until a General Election. Diane Abbott sitting down to negotiate our Brexit with Jean-Claude Juncker, while Corbyn stitches up a power-sharing deal with the Scottish Nationalists? It doesn't bear thinking about. But locally the best predictions from the political head-scratchers all point to a certain Conservative win in Newcastle-under-Lyme, a likely narrow Conservative win in Stoke-on-Trent South, and a possible win in Stoke-on-Trent North. Stoke would be freshly painted blue, and sitting proud on wide blue map. Because, at the MP level, Conservatives already hold all the seats surrounding Stoke, except for Newcastle-under-Lyme. 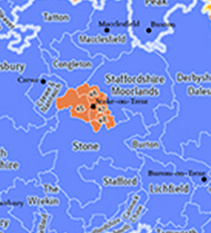