13th day on the allotment.

Weather: bright sunny day with high sparse cloud. N/NW wind. Temperature dipping to 7 degrees at 3.30pm and starting to feel cold in the stiffening north wind. I arrived at the allotment today at 12 noon, and stayed until 3.30pm. That's a bit too long for a single session (with digging and heavy weeding), perhaps. I'm finding the plot's best dug in 90 minute bursts (two hours if you include resting and the final palaver of boot scraping etc to get ready to leave). Still, it was a lovely day for it. Sunny with a light cold NW wind, and a few light bonfires nearby gave a pleasant woodsmoke smell. Through the good services of the site-maintenance man I've managed to acquire a long wooden pallet. It's suitable for being sawn into three parts to make a small compost bay. I'll have to take a proper woodsaw along, the next time I go. I also learned where the "unwanted plants" drop-off point is, and acquired a superb unwanted gooseberry bush, in magnificent condition... 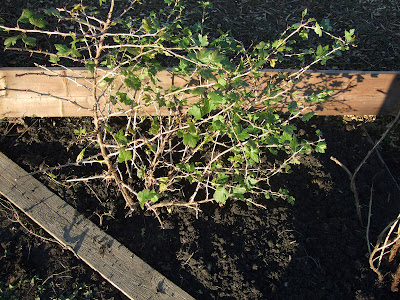 There are good reasons why no-one wants gooseberries (sawfly, the nasty thorns, sparse crops). But it's a sentimental thing for me to grow them, as my Nan had them and had a sort of "Battle of Britain" never-say-die attitude to her struggle with them, which I'd like to carry on. Plus, I love them to eat. So I dug over a corner for the new bush, took half a bag of weeds out, then put in the new gooseberry. Also pruned it back a little (something you're really only supposed to do with gooseberries in the dead of winter, but this one looks healthy enough to survive that). I ran the hoe over the lower plot, to keep the weeds down. Then I started to define the path edge more, digging out a strip of the weeds and finding along the way a half-bag's worth of potatoes (there must be more in the ridges, further in) and a few tiny almost triangular-shaped red onions (shallots?). Finally I put six half-bags of wood chips down on the newly-defined path-edge... 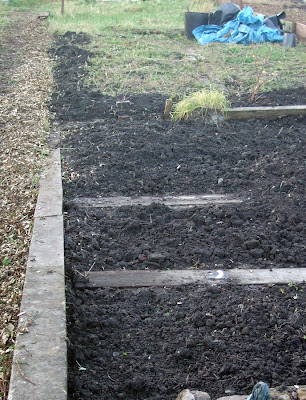 Along the way I found a bit of old smoking-pipe stem... 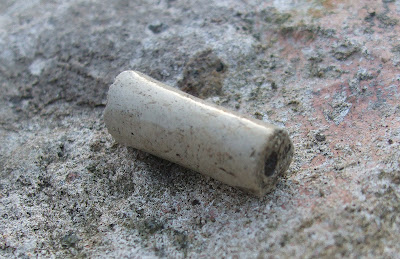 I'm told these pipe stems can be as early as Roman times, but I'm guessing this one is more likely to be 17th to 18th century. I also found out that the wife of a near-neighbor on the allotment is the Potteries artist Sue Law-Webb... 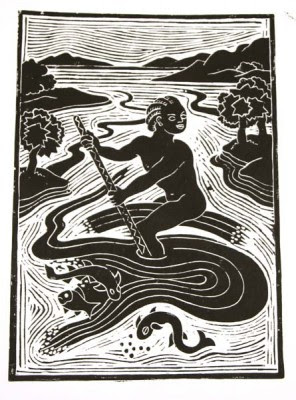 Above: Sue Law-Webb, "Life Cycle: Crossing the River of Oblivion".
Posted by Digger at Monday, November 05, 2012