14th day on the allotment

Weather: a long period of rain, just cleared. A strange sort of 10 degrees cold-but-mild weather, possibly something to so with the humidity. A quick hour at the allotment today, combined with some shopping at Sainsbury's. The remaining few buried weeds on the lower plot are obviously loving this mild damp weather, and the lower plot needed a good quick hoe-ing. Hopefully the first good frost will see them off. I also started a rough digging-out of another strip of the middle plot, alongside the path, in the hope of finding more potatoes there. I did find a few, but only at the sides. As I dug more into the four ridges, sadly there were no potatoes to be found there :( Oh well. It seems that those I found were the escapees, and that the rest had been lifted back in the spring. Still, I also managed to get my seed potatoes order in just in time for 12th Nov deadline for the allotment's bulk-buy scheme. I've ordered £10 worth (3 bags) of Red Duke of York Seed Potatoes (First Earlies). I'm not sure if that's enough, or maybe too many, but that's all I can afford at the moment. They're a 'heritage' potato bred during the war (1942) as part of the "Dig for Britain" movement. They're also listed as the "best seller" for seed potatoes in the latest Suttons catalogue, so they seem like a good bet. They apparently go into the soil after the last frosts, about April, and then can be harvested July/August — but apparently you can also leave them in to mature and bulk up, so as to have September/October baking potatoes...

"as an early potato they have a fine flavour, but if you leave them to mature, the tubers will grow big enough to turn into baking potatoes" 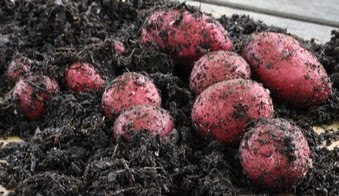