One of the UK's most creative independent think-tanks, The New Economics Foundation has a new pamphlet out. National Gardening Leave makes the case...

"...for a new, voluntary scheme to introduce a shorter working week, and for the rapid expansion of productive and pleasurable gardening in Britain's towns and cities." [my emphasis]

"Giving people entering new jobs (and, where possible, those in existing jobs) the option of working a four day week — something which is standard practice in the Netherlands, for example — brings potential multiple benefits to individuals, workplaces, communities, the environment and the economy."

The pamphlet's 'old hippie'-isms aside, it's an interesting read. Although a Kindle version would have made it far more pleasant to contemplate than a PDF. It's obviously partly based on Google's 20% time practice. As the most efficient and advanced parts of the capitalist world become much more of a 'free-time society' in the coming Great Abundance, a great many citizens will need to find productive and useful things to do. Possibly unpaid. As the report says, we seem to be heading to a future where we will very likely need...

"a radical redistribution of paid and unpaid time"

It's to be hoped that such a redistribution of time can be robustly tested first in the private sector, in an employee-led manner. Because if it isn't then the clop-hopping state may try to do it in some crisis-induced rush, and plunge us into an unwieldy "one size fits all" solution stuffed with middle managers and dubious IT contractors. The NEF's National Gardening Leave proposal runs alongside the recent policy proposal from Lord Bichard (that active pensioners should be asked to be socially useful in return for their pension money). Nice idea. But how to police it? A "gardening day" off has similar 'policing' problems. How is the employer to know that the employee isn't spending their "gardening" Fridays on clothes shopping and then stuffing themselves with cakes at Marks & Spencers? While paying young Kevin £5 an hour to tend the garden? One solution could be to open up the idea to all productive/useful 'fun' hobbies, on a social per-project basis. And I mean real hobbies, not gap-filling jobs for the state. Want to restore a windmill? You should be able to do that instead of pottering around the garden. By opening the idea up in this way, both the 'pensioner' and the 'lazy employee' activity-policing problems could be solved without the state. How? Via an autonomous Kickstarter-like service, in which people in a travel-region could pledge their skilled time (rather than money). Pledge your time to an independent openly-advertised project that has specific stepped goals. Useless project managers and no-show cake munchers would be shamed via a robust social ratings system and by video documentation. At the end of each year, the service (let's call it TimeSpring) would let you securely print a "social tax return" — this document would have official weight and would justify your Fridays off, or your pension top-up. The open social and video elements would: i) satisfy your employer that you've not been spending your Fridays off on retail-and-cakes therapy at the local Marks & Spencers; and ii) satisfy the taxpayer that you deserve your enhanced 'active and useful' old-age pension payments. 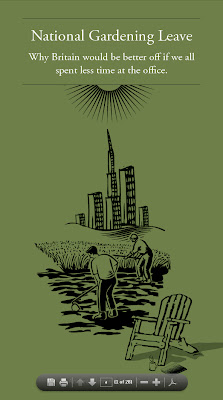