A friend visits the plot

A visit to the allotment today, but a non-digging one in the company of my friend Pete. He came up to Stoke on the train, to see what I've taken on. We were kindly given a look at the shop area in the community hut, learned some old and recent history about the site, and saw some old photos of the site. One of the old photos seemed to be from perhaps the 1970s(?), since the YMCA tower wasn't visible in it. I also discovered that the site has a working pigeon-loft at the north end, and noticed a pond at the bottom of the semi-cleared bee hives slope. Seeing that pond spurred the thought of having my own little pond on the 'wild' bit at the top of my plot. I don't have a car, so I'd ideally need to find someone from Freecycle to deliver an unwanted pond casing (or maybe some unwanted strong pond-liner) to the site gates early next Summer. I've also found out that the Royal Horticultural Society says that couch grass can be killed off by weedkillers, contrary to the popular belief that it's impossible to eradicate. Obviously they've done tests and research on the matter. Their clear advice suggests that you have to time the spraying just right, and do it with the right type of glycophosphate. They say it needs to be sprayed during a dry mild period in early Spring, when the couch is starting to send out new leaves — leaves which will take the chemicals down to kill the roots...

"In Spring, spray [Glyphosate] when the new [couch grass] growth has reached a minimum 10-15cm (4-6in) high with each shoot having not less than four or five new leaves. Spraying at this stage of growth, in mild conditions when growth is active, will usually be very effective" [Royal Horticultural Society, on the best couch grass treatment]

So that's now my new plan for dealing with the couch grass. I'll leave the top section (that's full of couch) until the Spring, then spray. Then I'll clear it off and fork it over after three weeks, bagging the dead roots up 'just in case'. That'll mean the top section of the plot won't really be plant-able until maybe the end of April or later, but it seems the best option for permanent eradication. Down in Stoke town, Pete and I noted a cool (but rather expensive at £69.99) proper weather station in the windows of the big Maplins electronics shop... 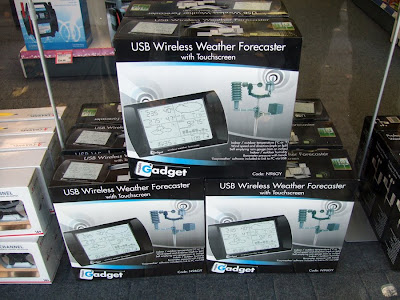 Email ThisBlogThis!Share to TwitterShare to FacebookShare to Pinterest
Labels: Goodies and gadgets, My allotment