15th day on the allotment

Weather: surprisingly sunny, whereas the forecast has said cloudy. Light south winds. 10 degrees, dipping to 9 degrees as the mist started to gather in the valley at 3.45pm. I went out to vote, and then spent a couple of hours on the allotment. * Got another pallet, this time a very heavy "weighted" one. Suitable for a compost bin base.

* Divided and planted some chive clumps that I'd been given, before the frost gets them, and set them against the brick wall on the lower plot.

* Started a proper digging out of the weeds from the middle plot... 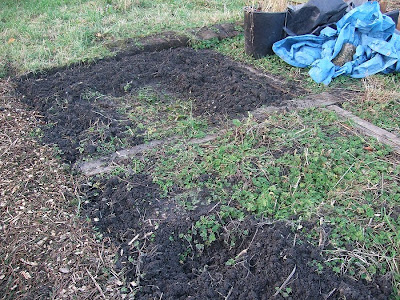 The weather and the consistency/dampness of soil were perfect for weed-pulling. Sadly, though, I found the telltale "long white roots" of couch grass in parts of the middle plot.

The penny has finally dropped about the top plot (of the three). There's a lot of couch grass in it. In a few dribs-and-drabs that couch grass has obviously been trying to get a first foothold in the top part of the middle plot. Thankfully there's a very solid two-brick barrier between it and the middle plot, which has prevented most of its "creep down". But there's a gap in the wall, at the end. So it looks like I'm going to have to wedge in some bricks along there, so as to make a basic continuation of the wall up to the path.

Once the lower and middle plots are fully weeded, it might then be worth having a go at some of the top part of the allotment. Couch grass, and all. I'll at least try a basic forking out of the bulk of the couch grass there, up to the metal "H" frame. Then I'll perhaps unfold the carpet (which is currently acting as a "rain hat" for the bonfire) over it, and wait until the heat of the summer really bakes it. Then I'll peel it back and try another digging out of the roots, leaving them to wither in the heat. Finally I might put in some sort of late summer-starting crop that would smother any remaining grass growth. I don't plan to try runner beans in my first year on the metal "H" frame I have, so I'm thinking that a "wall" of some tall close-planted blue cornflowers might do well there. I've grown them before and they're fantastic in good soil, and get really tall. Strings could be run across the "H" frame at various heights, to support them.
Posted by Digger at Thursday, November 15, 2012