Weather: incredibly mild despite the gusty wind. Ground still very dry, even after recent dampening showers, and wind skirls up dust. 20 degrees on the side of the shed.

Suddenly, spring is here. The rhubarb clumps seem twice as big as they did last time I visited, and twice as dark. Some cheeky dandelions have appeared from nowhere, some with closed-up flower heads on them.

I had another hoe of the main beds. Then I took the weeds out of the little side bed, bagged them, and gave the bed a good forking. I also cleared off the little brick path in front of it, ready to weedkiller any further weed growth on it. 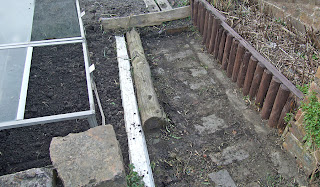 At the top of the plot, among the grass by the apple tree, I spotted yet another gooseberry by its new leaves. It had been lurking there, unknown, all winter. Taking the spade I had it out, and brought it down to join the other gooseberry bushes... 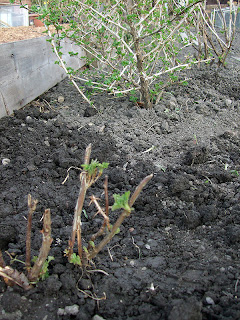 Changing my boots ready to go home, I spotted something I thought was a big bit of woodchip at the heel. Trying to get it out, it turned out to be a frog. He hopped down and vanished behind the water butt. Obviously the odour eaters in the boots are working!