Weather: bitterly cold and strong NE wind, but sunny during the days. Frosts at night.

Back up to the plot after a month away, on Wednesday and Friday of this last week. The plot was not much changed, as nothing much is growing yet due to the intense and regular night frosts. The frosts have continued with intensity throughout March, and there was another -2 on Friday night. The snow is still lingering on the hilltops across the valley, and also on the sheltered parts of the bank at the edge of the allotments site. There was not a whit of weed growth to see, but I did a bit of hoe work anyway — just to discourage a few hardy weeds that might be sheltering just under the soil.

Up at the top of my plot there are now clearly about five patches of rhubarb coming through, ready to spurt once the frosts have gone. Also at the top, a small patch of nettles had started. A dock had also started to show signs of life. These were also discouraged with some hoe work, although of course it's really their roots which need digging out.

I was very pleased to find that Gareth has kindly provided my plot with a lovely new fence and a latching gate. Ingeniously made from old pallets and a pole he found discarded in the street... 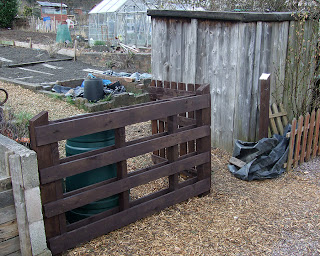 He also gave me a tub of wood preservative, which I can use on my (very dried out) small shed, so it will match the fence.

The wood preservative also came in handy in constructing my own new compost-heap container out of old pallets — pictures of that will be here when it's finished. It's cut, nailed, and stained, but just needs a top cover to be made and stained for it now, to help keep rain off the top.

I've also purchased some basic seeds for things I'll actually eat: broad beans, courgettes, wild rocket, perpetual spinach. Plus some garlic bulbs and small onion bulbs. The seed potatoes are still covered up in the shed, raised up in the midst of some mounded netting, and (hopefully) protected from the frost.

I also discovered that Stoke town does have a basic garden centre after all, in the form of a wing of the Poundstretcher (opposite the independent second-hand record shop). Quite a bit of stock in there, at better prices than B&Q. Although no large bags of general pelleted fertiliser, sadly, or I would have had one.