Just a note to say that the city now has one year to prepare for the 30th anniversary (May 2016) of the Stoke-on-Trent National Garden Festival 1986, now Festival Park and environs. Off the top of my head, a few ideas...

* a major well-researched gallery exhibition on the history of the site, perhaps also a book.

* a one night 'Sound & Light Night' on the site - artists working on the parkland areas of the site to make suitable artworks (temporary natural sculptures; environment art; costumed tableaux in dewy groves; illuminated light art; low-key ambient sound art) for one night only. I note that the large commercial “Just So” children’s art festival, held annually in woodland a few miles north of Stoke, has built up a great deal of expertise in such matters, and might be able to provide access to their roster of experienced artists.

If St. Modwen are not interested in providing their well-tended parkland area at Festival Park, then perhaps the rougher adjacent Grange Park area of the site could be used - that runs from the summit of the hill behind Morrisons down to Rogerson's Meadow / Navigation Lane at Middleport. In which case the canal towpath from Forge Lane to Middleport might also play a part.

Another potential location for a 'Light Night' would be the parkland around the Etruria Industrial Museum, which was also part of the Garden Festival. The event could be an evening follow-on from the Etruria Canal Festival, which itself could have a Garden Festival theme in 2016 - floral barges etc. The Etruria site could potentially be gated for a tickets-only evening.

* reclaim 30 small grotty waste sites across the city as 'pocket parks' (e.g. the waste plot between AirSpace and the Mitchell in the city centre), with the help of designers, architects and artists.

* perhaps an 'Open Gardens' weekend across the city.

* perhaps bring the ancient 'spring and well-dressing' floral tradition down to Stoke, from the Peak District where it still survives. Perhaps to mark the site of hidden culverted rivers and streams, and also the natural seasonal springs that still survive (e.g. several around Hartshill, above Stoke town).

I also note that the increasingly grotty car park area on Festival Park retail park is apparently set for a major refurb, which should (my guess) be finished by summer 2016. It'll probably be very conventional, but I wonder if some form of artistic topiary (hedges-as-sculpture) might be included in that, so as to link the site to the visual heritage of the Garden Festival that can still be seen on the adjacent parkland.

Made in Stoke-on-Trent, a cool ceramic "bee palace" for the various solitary species of British bumblebee to nest in. 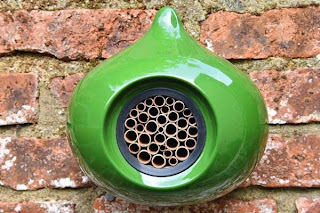 "Made entirely in England by an artisan potter in Stoke-on-Trent the beepalace is slip cast in small batches and hand glazed."

Looks like great work is happening at Root 'n' Fruit, a new 717 square-yard community-run allotment, located just about at the junction of Middleport / Longport / Dalehall, in the north of Stoke-on-Trent. It's on Facebook, with some great pictures. 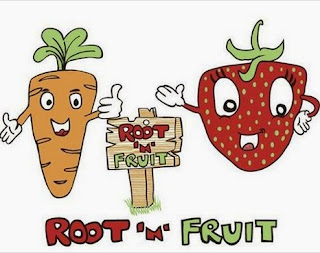 According to this map placement, this is the location. I seem to remember that there used to be a small allotments entrance at about the same spot in the early 2000s, so I think it's part of a larger site. 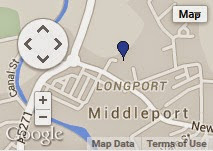 Email ThisBlogThis!Share to TwitterShare to FacebookShare to Pinterest
Labels: Allotments in the news, Stoke-on-Trent

After the election results, a promised "ambitious programme of pocket parks" will now be happening across the UK in the next few years. Is there potential there, perhaps, for some kind of 'edible planting' in some cases? Imagine a small pocket park planted up with the complete range of native edible plants. I mean away from main roads and cars. There are apparently a few such in London, but they're alongside main roads — where you really wouldn't want to pluck-and-nibble because of all the nasty gunk that comes off the vehicles.
Posted by Digger at Wednesday, May 13, 2015 No comments:

A 40 years' wait for allotments

Staffordshire village gets allotments after 40 years...

Over 45 allotment plots have been re-created on the former site at High Hill, Essington, which has stood abandoned for more than 40 years. Councillor David Clifft (Independent), chairman of Essington Allotments Association said: "In just six months local residents and parish councillors have transformed the completely overgrown two acre site into a finely tended field." Over 40 people have already secured their plots and just a few remain for rent."

Where now for the greens and leftists?

Well, what an interesting election night. The Labour wins in Newcastle-under-Lyme and Stoke Central perfectly illustrated the sentiment that "a vote for UKIP is a vote for Labour". But in the end, it made no difference nationally — UKIP has been crushed along with Labour and the Lib Dems.

Even the Greens appear to have flopped, in terms of actually electing people. They campaigned on a manifesto that failed to even mention practical grassroots issues like litter, favouring instead an ideological mish-mash of complicated and untried proposals. These floated high above the heads of ordinary voters, who merely chuckled at the wilder policy ideas. The Greens have only managed to keep their one MP in Brighton. In the local councils the Greens squeezed out a mere 16 new local councillors across the whole nation, and lost control of the council in Brighton after heavy losses there. They have effectively failed to break out of toe-holds in Bristol and Brighton. Millions saw their often scruffy and eccentric candidates standing sheepishly on stages during the election TV coverage, thus confirming the public stereotype of the greens. Their overall vote was only up by 2.8%, despite their standing vastly more candidates this time. So it was hardly the grand national surge they had hoped for.

So the Greens are now damaged goods. Will that mean the Green Party becomes a leftist lifeboat, as the smooth-suited Blairites and Mandelsonian managers emerge from their bunkers to take back the Labour Party? Somehow I doubt that most Labour refugees could stomach the economic illiteracy of the Greens. Not to mention their wibbly-wobbly eclecticism on drug legalisation, group marriage and other issues of interest only to old hippies and naive students. But a sprinkling of the hardiest and most distraught Lib Dem local activists may well head to the Greens, if they haven't already crossed over.

The Greens may also be a tempting option for some as they're effectively the only micro-party still standing after the election. They appear to have taken the student vote, and the old socialist hard left traditionally loves nothing more than getting its paws on passionate young students. So I suspect there might just be some kind of organised attempt from leftist refugees to hijack the weakened Greens, possibly even leading to a civil war with the extreme leftists who are already said to have infiltrated the party. Just my guess.

But the Greens will now be facing a re-invigorated Conservative Party that is likely to reclaim neglected genuine green conservation issues such as: countryside management; ecology and wildlife; forestry; dog control; litter; parks and allotments; footpaths; energy and water conservation. The Lib Dems have now lost their claims to a localist legitimacy on such grassroots issues. UKIP, if it ever was a party of the countryside, has effectively been booted off the national stage for now. The Conservatives will need a strong presence on green issues to counteract the inevitable media and activist pressure around fox-hunting, new airports and roads, HS2, cuts in subsidies to wind-farms, fracking, badger culling etc.

Into a revivified green mix the Conservatives could sprinkle big headline items like new major overseas conservation reserves (already underway), and big global wildlife crime measures (William Hague is apparently headed that way, in his retirement) both in terms of policy and technology, plus a continued broad commitment to a sensible de-carbonisation of the economy.