2nd May election in Stoke - who's standing?

Right, then, it's time to take a look at who's standing in the Local Council Elections on 2nd May 2019. The page that pops up on search is Stoke-on-Trent City Council's list by election ward. 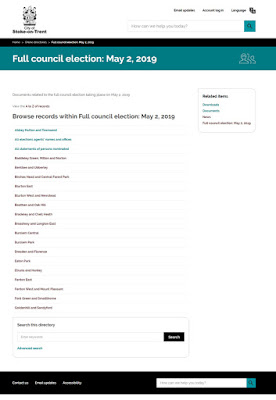 On looking at this page, it would seem that Council doesn't yet appear to have a candidate lists online for Hanley Park and Shelton, nor Hartshill, Penkhull and Boothen and a number of others wards. They seem to be cutting it a bit fine, re: this page and the approaching date. A resident might look at the page and wrongly think only half the Council was up for election, which could skew the vote. However, if you know it's actually a full council election, and you go to their A-Z Directory for the elections, and you known the exact name of your ward (most people don't)... then you can get to lists of candidates for the missing wards such as Hanley Park and Shelton and Hartshill and Basford and Penkhull and Stoke... 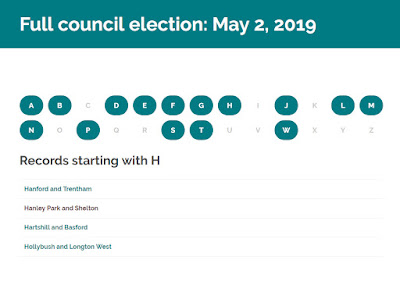 But even then, looking at the current listings, the urban city and its surrounding suburban wards don't look very 'hot' at all. There's hardly any choice in Etruria and Hanley / Hartshill and Basford / Hanley Park and Shelton — it's all just a straight: Conservative, Labour or Independent choice. The same goes for both Burslem wards. I spotted about three or four Greens on the lists, including one in Penkhull and Stoke town (presumably hoping for a student vote), and a few hardy UKIP-ers are hoping for votes on estates like Bentilee, Stanfields and a part of the Meir. Over in the Staffordshire Moorlands, the Labour Party has chosen a very questionable candidate. One has to assume this choice reflects the will and sentiment of the local Labour Party? Will other local Labour candidates, in Stoke and elsewhere, be speaking out about this?
Posted by Digger at Friday, April 26, 2019 No comments:

It's fruity in Shropshire

Over in Shropshire: Victorian orchard brought back to life to explore history of fruit. 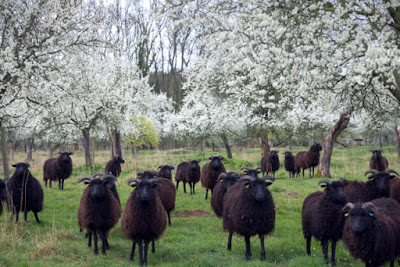