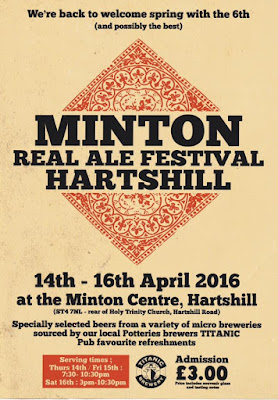 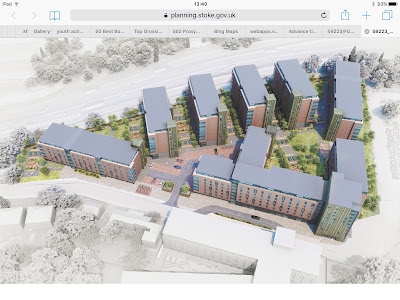 On the plant-growing season in UK

In The Guardian today is an article titled "Plant-growing season in UK now a month longer than in 1990". Earlier springtimes are said to be responsible for the overwhelming part of the extension. So, it looks like good news for gardeners.

True, but it's also very very old news in terms of science. Scientists have been tracking the increase in England since 1980... 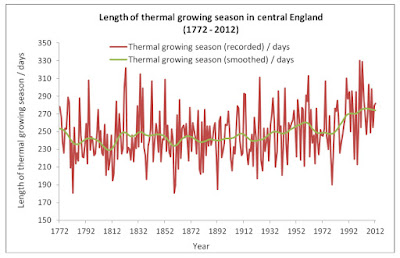 Scotland shows much the same upward curve. Though there it appears to have started more gradually, and twenty years earlier in 1960. Possibly the difference is partly also due to their lesser urban heat-islands, and less light-pollution at night... 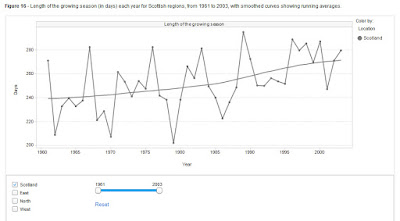 (Source: An online handbook of climate trends across Scotland)

Temperature rises in Scotland have been nudging an overall 0.7°C compared to 30 years ago, which is significant but also well within the envelope of natural decadal variability.

Another less debatable factor there is that the UK's slight overall increase in rainfall is happening almost entirely in Scotland. True, Wales now has 10% more rain than 30 years ago, but there's so much of there that I doubt anyone's noticed. While here in England there's been almost no perceptible change since 1910. Nor is it getting rainier in summer downpours. Let's take Oxfordshire as a proxy for the Midlands counties, for instance, as it has excellent long-term rain records. Its average rainfall per rain-day between April and September varies very little from year to year.

But back to the Midlands as a whole. We shouldn't go taking today's 'Guardian news' literally and merrily planting our potatoes in mid-February. Take a look at the savage ups-and-downs of the actual recorded growing season lengths on those graphs, rather than at the computer-smoothed statistical trend line. Those jaggies reflect what gardeners know all too well, living on an island so sensitive to the warmth-giving powers of the North Atlantic Drift (aka 'The Gulf Stream'). We know that an essentially random tweak of an Atlantic ocean current, or a twist in a vortex of Arctic winds, can often decide the arrival date of spring in any given year. As H.W. Linderholm concluded, after surveying all the scientific literature on the topic to 2005...

"... several authors have found strong associations between large scale weather phenomena (e.g. the NAO [North Atlantic Oscillation]) and growing season variability, suggesting that global warming may not be the only explanation. Also, other factors like land use change may have been of importance. It must be kept in mind that the observed changes in GSL [growing season length] are not uniform; while increased GSL has been observed in low-to-mid latitudes, the GSL seems to decrease at some high latitude and altitude sites." ("Growing Season Changes in the Last Century", Agricultural and Forest Meteorology, March 2006).

The variability appears to arise almost entirely from the tension between two mega-forces out in the Atlantic. The North Atlantic Oscillation dominates us until February, and then the Atlantic Multidecadal Oscillation takes over in March/April. Usually.

Some things appear to have changed, it's true. On a 50-year decadal basis there are now less days with air frost. There are now 14 less days measured with air frost in Derbyshire and Staffordshire, than there were in the 1970s. To the east of us there are more sunny days, with East Anglia now getting 10% more sunny days. Possibly the two things are connected, and down to a long-term vortex tweak. More clouds over Derbyshire and Staffordshire = less frost. Less clouds over East Anglia = more sunny days there. Or it could just be that the 50-year trend-line has been skewed by starting it with the bitter winters of the late 1970s and early 1980s.

How does all this affect the local wildlife? Well, our hardy British wildlife has evolved to be highly adaptable to the variable timing of the arrival of spring. Pollinators and flora are likewise adapted to such variations. It thus seems unlikely that such natural variability will phase our wildlife, especially given how long it's been happening — the graph above shows it happening long before the Industrial Revolution. In our own time, a few extra years (per decade) in which there's an earlier arrival of a warm spring, and/or an extended Indian summer in Autumn, would seem to me to benefit almost all species.

Much the same can be said of the apparent trend toward very slightly wetter and slightly milder winters in England, as that's also broadly beneficial since it prevents drought (at the cost of a little localised temporary flooding, though a lot of that is down to cafe grease and wet-wipe blocked drains). According to the peer-reviewed papers, the rainier winters are due to natural multi-decadal variability that has been going up and down — with no significant trend-pattern — for the last 150 years. It's in a 'see-saw' pattern, if you like. We're currently in a decade-long wet patch of winters, after a run of dry years when there were alarmist headlines that the UK was now living in "permanent drought" or that "we are no longer a rainy country". But we'll come out of it and dry off again, as any meteorologist should well know. Like the growing-season shifts, such rolling multi-year shifts from wet to dry seem to be due to essentially random tweaks of a huge Atlantic ocean current, which then does or doesn't funnel winter storms toward the British Isles.

Email ThisBlogThis!Share to TwitterShare to FacebookShare to Pinterest
Labels: Allotments in the news, Environment, Wildlife

According to the TomTom Traffic Index, which tracks signals from vehicles fitted with TomTom GPS...

Not good for either the economy (lateness, driver stress), health (think of all the particulates and dioxides, along main roads choked with idling stop-start traffic), or fuel efficiency and the environment generally.

And 1000s of 'old clunker' cars and vans have been taken off the roads over the last five years, already. So that's obviously not a strong solution to the problem.

Animals don't think: "Oh, that's just cute Mrs. Fluffee Wuffles down there...". They think: "Uh oh, over forty slavering hairy carnivores regularly walk through this area like they own it, and half of them leave smelly shit behind... so I'm going elsewhere..."

Researchers have known for a long time now that dog-walking permanently scares away around a third of all the birds from conservation areas. Now it seems that a wider and clearer scientific case for banning dog-walking is developing. Especially in country parks and nature reserves, and on coastal and river paths. Dog walking in such areas clearly needs to be banned on ecological grounds, if our nature reserves are really meant for nature as intended.

There are further, invisible effects. For instance various compounds used to de-lice, de-flea and otherwise clean tens of millions of dogs are polluting British rivers and damaging the water-fauna that live in the water. These wash off the dogs on washing in driveways or paddling in water, are extremely toxic (Fipronil and Imidacloprid), degrade to even worse forms, and are widespread in all UK rivers. 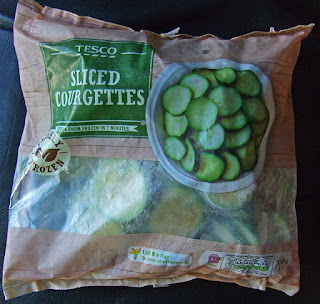 "Learn the art of wild fermentation" - workshop in Stoke town 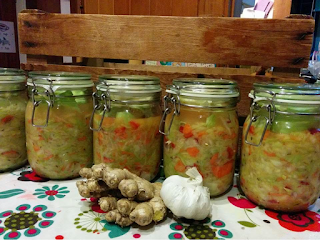 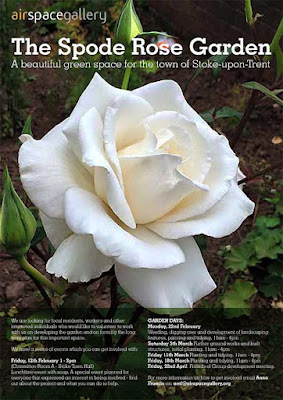