Where will they put the West Midlands National Park?

In the news today: "Plans for West Midlands National Park move forward". So where exactly would they put it, if it was to be something real and big. Not just a patchwork PR exercise that aimed to provoke no NIMBY-ism from voters? If it's indeed to be big and green, then I guess it would have to be near Birmingham, for political reasons. And be positioned so it at least has a chance of an eventual genuine connection with the National Forest, in perhaps 50 years. Looking at the map, I'd then guess that a starting point would be adding 'wild-belt' hedged strips and that try to link up the natural areas between Sutton Park and Cannock Chase. Such that after 20 years a squirrel could (just about) leap from tree-to-tree from Sutton Coldfield up to Stafford. 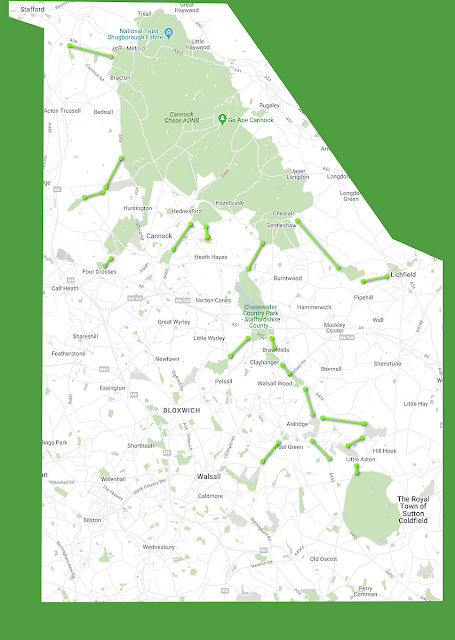 Such wide thick-hedged wildife strips would be very-low cost, if they were for nature only, and were not hijacked by local councils to be public paths used by cyclists, dog-walkers, etc. All one would need would be to buy the strips of relatively low-value land, then add some stakes and wire and hedge it either side of the strip. The strip would be wide enough to be easily mown for wild-flower meadow, and would go more or less in a bee-line. After a decade, get in some lads with hedge-laying tools. Maybe also make some ponds at the connector-points, and at a distance around those plant clumps of what will eventually become large mature trees. All just for nature, no public access to the connector strips, only to what they're connecting.
Posted by Digger at Friday, July 31, 2020 No comments:

"Stoke-on-Trent 'idyllic oasis' left looking this after being 'neglected' during lockdown". 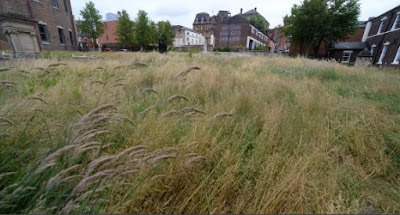 First off, it's a complete journalistic spaff to call it an 'idyllic oasis'. It's a mini-park place in Hanley you avoid totally, or hurry through as quickly as possible, to avoid the drunks, druggies, and those waiting to go into the adjacent law courts to be sentenced for some heinous crime. Secondly, as I understand it The Sentinel's offices are right next door to this. Did they not peep put of their windows before now, and spot that the grass was getting a bit long? Why have they saved up the 'story' until now? Thirdly, who cares? The city now has a policy of letting verges grow quite long, for wildlife. It's great that the bees and crane-flies have been able to buzz among it for six weeks, and now we can cut it down when a critical mass of shoppers and revellers are back in the city centre again. Which, given the terrible weather forecast for this end-of-lockdown weekend, looks like being a week or so yet. The more interesting response from the Sentinel might have been to call in a local ecologist and see what they can find in there with a camera-microscope.
Posted by Digger at Thursday, July 02, 2020 No comments:

In the latest edition of The Idler, a revolving shed. Just for a writer to write in, so not actually a working gardening shed weighted down by potatoes, junk and heavy metal implements. And thus able to turn easily. 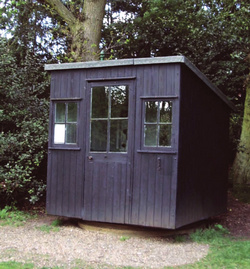 The turntable means it is able to turn away from a bitter or gusting wind, or from glaring sunlight, or toward the warming dawn.
Posted by Digger at Wednesday, July 01, 2020 No comments: