Allotments in Stoke-on-Trent: the statistics

I thought I'd do a quick bit of Web research on the statistics and figures for allotments in the city of Stoke-on-Trent, just for the online record. The sources are The Sentinel newspaper archives, Hansard, a 1988 Staffordshire University report, an Aug 2011 Freedom of Information request, and the MyTunstall hyperlocal website: Stoke-on-Trent City Council officially knows of 80 allotment sites across the city [update: this was stated as 76 in the Sentinel on 5th April 2013], and these sites contain about 3,500 individual or half plots (some of which will be fallow, for various reasons). About 60 of these sites are Council-run [update: this was stated as 54 in the Sentinel on 5th April 2013], with a total figure of 1,350 Council plot tenants given in 2009. [Autonomous associations self-managed 22 of the Stoke sites at April 2013]. The average annual plot rent on a Council-administered site is said to be around £45 a year at the end of 2012. A comparable place like Barrow-in-Furness is currently in the process of jacking the annual rent up to £80. Six disused allotment sites were re-opened by the Council in 2009/10, to cope with the demand caused by the recession which had caused the waiting list in the city to rise to 300. Despite these new sites, at 25th August 2011 the waiting-list across the whole city was still high at 248 (this figure excludes the 20 or so user-managed sites). The Council stated at the end of summer 2011 they had no plans to open new allotments in the city, or to reclaim those that have become totally overgrown and disused (such as Rogerson's Meadow at the north end of Grange Park, Middleport). This is despite the continuing demand, as judged by the waiting list remaining high, and despite a Council's statutory duty to provide plots to those requesting them. According to a FoI request, most people on the official waiting list in Stoke-on-Trent wait for somewhere under a year before getting a plot on a Council-run site, although on some very popular allotments there can be a wait of three years or more. There's a possibility that some popular sites have closed their waiting-lists, as it seems the Council permits this — some years ago The Sentinel reported (18th Aug 2008) that... "Some oversubscribed allotments in the city are closing waiting lists". In 2009 The Sentinel reported that the Council was looking at selling off about six allotment sites, which had presumably become disused due to neglect. Allotments had been run-down under Council management in the 2000s — in 2009 the Council's own executive accepted a scrutiny panel -commissioned report which concluded that all the Council's...

"allotments had suffered over recent years from a lack of proper management". (Sentinel newspaper, 5th Jan 2009)

Given the Labour-run Council's record on running down assets that sit on land they wish to sell off to developers, the suspicion might be that some sites had been deliberately allowed to become run down. If so, then they would have been following a national trend. Nationally, allotment provision appears to have slumped under the Labour government. A 2006 academic report on allotments was commissioned by the Labour government from the University of Derby — although the damning report was then kept buried until 2011 when it was unearthed by the new government. This report found that the local Councils had together sold off around 50,000 individual plots to developers, and that allotment sites had fallen by... "nearly 800 between 1996 and 2006." According to the MyTunstall website, allotments cover 185 acres of Stoke-on-Trent, and the City Council is said to be the third largest city provider of allotments in the UK. It's not known how many of the city's sites may have been sold to developers by Labour over the past 15 years or so, if any. A 1988 study found that just 1.1% of Stoke-on-Trent's allotment holders were under 25, with 88.3% being over 40. The gender balance was then 92% male, 8% female. 49% of plot holders were either unemployed or retired. Plot holders rarely lived more than a mile from the plot they held. For more details see: George Kay's Allotment Gardens in Stoke-on-Trent (1988), issue 11 of Staffordshire University's academic journal Occasional Papers in Geography. The abutting town of Newcastle-under-Lyme (geographically a seamless part of the Stoke city-district, although many there profess to loathe Stoke) has just seven allotment sites and 254 plots, according to a report in The Sentinel of Nov 2011. Reflecting the relatively affluent nature of the town, rents there are £53.10 a year. At Nov 2011 there was a huge waiting list there of 295, more than the entire available number of plots. Despite this obvious need, the Council was reportedly seeking to work out how their allotment costs... "can be reduced significantly or fully recovered" (Sentinel, 29th Nov 2011) and there appear to be no signs of new provision being planned. Newcastle's councillors appear to view allotments as cost-sinks, rather than as invaluable community assets. Given the running-cost figures I give at the end of this article, this seems an odd stance to take. Possibly the councillors are not in full possession of the financial details. At least the waiting list in Newcastle still appears to be open, at a time when many councils are simply closing their waiting lists due to the weight of demand, and in order to avoid negative publicity. Further allotments in the Stoke city-region are provided under the auspices of lesser Councils in places such as Kidsgrove (£32 a year), and Lyme Valley. Allotments sites in the Staffordshire Moorlands (not including Leek) are private, and are not controlled by the Council — although they do manage Church Rd. Community Gardens which provides therapeutic gardening for the NHS and local children's centres. Leek Town Council controls seven allotment sites, with an annual plot rent of £20. The average local per-plot running costs for a local Council are unknown. It seems likely site upkeep costs are lower in Stoke-on-Trent than elsewhere, due to the large number of sites and the economies of scale which that must bring. But one indication on running costs in a comparable northerly city region is to be found in a 2004 debate on allotments in the House of Commons (Hansard, 9th December 2004). The then-M.P. Ben Chapman said that in his constituency of Wirral South the annual cost of renting a plot was... "£25 a year against the council's upkeep costs of £31". Adjusting for inflation, that would put current Council upkeep costs at around £38.50 per plot. It therefore seems likely that, even taking into account pensioner discounts, the city of Stoke is at least breaking even by charging an average £45-50 a year rent. By comparison, in Norwich the allotments in that city are reported to generate a profit of £27,540 on a plot rent of around £40. Despite this, rents there are now reportedly set to be increased to £70 a year in 2013/14 — which is expected to make the Council a profit of £70,107. It seems regrettable that some Councils are now starting to see their allotments as cash-cows and and doubling or even tripling prices. The economics of allotments are not simply in their cash income, but also in the wider social savings that arise from the incalculable health and well-being benefits that allotments give to men over 40. Raising allotment plot rates may bring a city some trifling profit, but the inadvertent long-term effect on male health could add many millions annually to the health and social care budget.
Posted by Digger at Sunday, September 30, 2012 1 comment:

What to grow on the new plot?

What to grow on the new plot, once it's cleared? At present I plan to start with the easy and hardier plants. Luckily these also seem to be ones that I'll actually eat! * Courgettes. Although it hot weather they need watering every day. Perhaps bottle drippers might suffice. * Onions. Just the normal 'Spanish' type. * Broad beans. * Potatoes. Probably baking. * Garlic. Stiffneck variety. * Gooseberry bushes. These might be a bit expensive, possibly. For not much return. In the past I've found them prone to occasional complete defoliation by sawfly caterpillars in May. But it would be good to get some in. * Rhubarb. This takes two years to establish, before you can pull a crop from it. * Mint. I already have a small and rather forlorn-looking stand of mint, which I'll probably keep in. * Wildflowers. A small stand of wildflowers at the top. The presence of docks there indicate a damper soil, so I suspect that they won't be the usual delicate "sandy soil" wildflowers. Possibly something more in the line of woodland plants such as Borage (edible) and Foxgloves. Maybe also a line of Lavender, to separate the flowers from the veg. Perhaps with some blue cornflowers flowering above the Lavender. 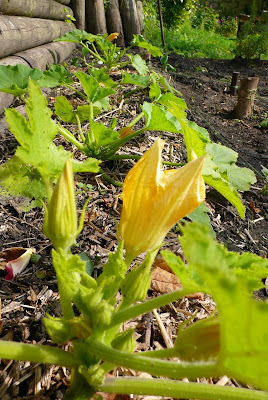 Above: Courgettes, CC picture by Snoobs.
Celery seems a bit too advanced for a starter year. I love tomatoes, peppers, hot chillies, and mushrooms, but without a larger shed / greenhouse those are out of reach for now. But on the plus side, it looks like I'll have apples for free.
Posted by Digger at Sunday, September 30, 2012 No comments:

Burslem School of Art, Stoke-on-Trent, is putting on a musical theatre show about allotments, for one night only on 26th October 2012... Losing The Plot: Love, Life and Allotments....

"The gardeners of Thistledale Allotments are a rag-bag bunch of diggers and dreamers. Strong personalities frequently clash over the best treatment for mealy bugs, and the annual 'Heaviest and Longest' competition is always a time when old feuds and new flirtations threaten to undermine the fragile peace. Then Harvey from the Council pays them a visit and they realise that they must pull together, or forfeit their precious plot forever..." 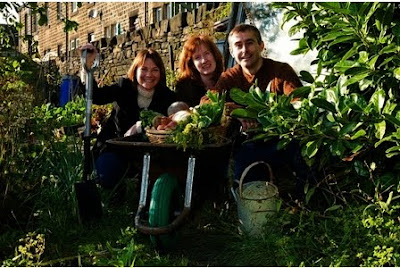 Above: Members of the cast and crew of the show: from left, writer Deborah McAndrew; artistic director Marianne McNamara; and director Adam Sunderland.
Posted by Digger at Sunday, September 30, 2012 No comments:

Welcome to this new blog. It's a gloriously sunny Saturday 29th Sept in Stoke-on-Trent, and I now have a whole lotta plot! Yes, I've taken on my first allotment. Here she is... 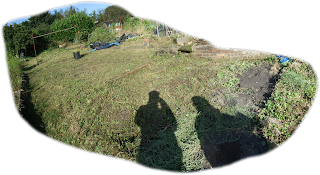 Click the picture to see the big version.
She's No.42, on a large independently-run non-Council allotments site on a south-east facing hillside set high above Stoke-on-Trent. Well drained, nice soil, a few docks and thistles up at the top. But nothing to do with Stoke City Council, which is kind of reassuring. I signed on the dotted line and got it at 10.30am today. The rent should be about £30 a year. Not perfect, but it's a start and at least "I'm on the site". Over the next two months I'll get the plot cleaned off and start to prepare for next Springtime. Sadly I can't do anything today, and the weather on Sunday is forecast to be foul. Expect more photos Monday when I go up to have a prod and do some measuring and mapping. Then an update about some hearty manly digging, later next week. Probably followed by various remedies for back ache. As you can see from the photo above, she's a rather unloved plot. A bit daunting for a beginner. But I have a copy of the book Allotment Gardening For Dummies

, and I'm not a politically correct hippie who fears using chemicals (although I hope they won't be needed). At the top there's a rather nice seating area under an abundantly fruiting apple tree, which is where I get to sit and have a rest... 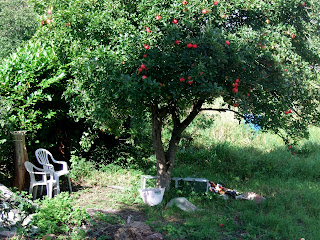 Click the picture to see the big version.
I spoke with some of the '10am Saturday' chaps, including the Secretary and the Communications guy who runs a very sharp website and monthly newsletter, and it all looks like a good mix. Now it's armchair pipe-dreams until Monday, when I go up again and have a proper prod at it — and reel back in horror! I might have to scrump a few apples to calm my nerves...
Posted by Digger at Saturday, September 29, 2012 No comments: