A new study has mapped "free school meals", aiming to get a sense of where child poverty is actually happening. Stoke has seen a big improvement since 2002, despite the Great Recession of 2007 onwards...

"Our map of the whole country shows that major urban centres have tended to become less disadvantaged since 2002, as have smaller towns and cities such as Bedford, Grimsby, Stoke-on-Trent and Telford." 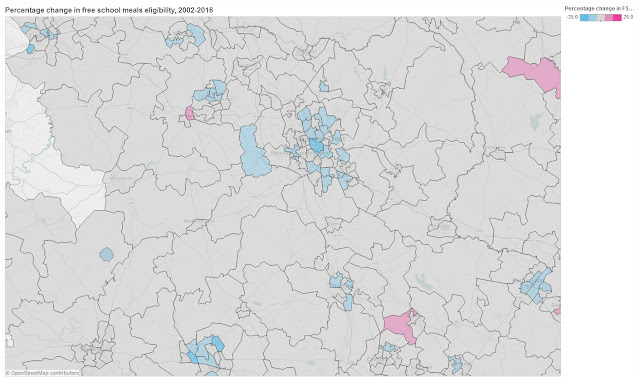 In the map, blue is "improved". The deeper the blue colour, the better the improvement. Inner-city Stoke is the deep blue bit in the middle of the map. The rural area to the west of Newcastle-under-Lyme has also improved. Pink indicates the four remaining hot-spots in our area, those which have declined since 2002. As you can see, locally there are pink areas in: Nantwich (currently has 79 kids claiming); between Rugeley and Cannock (currently has 68 kids claiming); on the south-west edge of Burton-on-Trent (currently 110 kids claiming), and in the Peak part of the Derbyshire Dales (current has 150 kids claiming free school meals).
Posted by Digger at Thursday, December 21, 2017