* Election Day's super-storm now has the name "Doris", which seems a very apt name for Stoke. It's getting worse and worse on the forecast. The polling stations open at 7am and it currently looks like either 7am or after 6pm would be tolerable. If you're working outside Stoke and hoping to get back home in time to vote in the early evening, expect rail and other delays due to the storm. 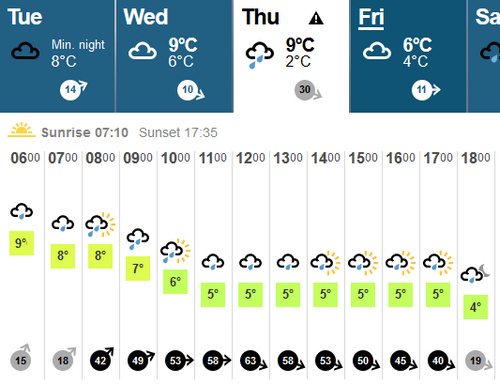 * ITV News's Deputy Political Editor Chris Ship tweets tonight about a un-named Labour source, who claims to be worried about the Conservatives creeping up in Stoke. It's genuine, from the stream on his verified account.

But possibly it's just the Labour lefties trying to get their core vote out with the implied message that: 'Nazi Ukip may have collapsed in Stoke, but... Bash The Evil Tories!!!'.

* As I predicted earlier on this blog, ITV said an hour ago "Stoke-on-Trent by-election turning into three-way fight".

* The Telegraph: "Vladimir Putin told to keep out of Stoke by election after pro-Russia Twitter accounts target Ukip and Paul Nuttall". Sounds like Ukip may be preparing an "It was the Russians wot stole it!" defence against losing, similar to Hillary Clinton's bonkers claims after the recent U.S. election?

* The Express: "Paul Nuttall says he WILL remain as Ukip leader even if he loses Stoke by-election".

Also a just-released New Path guide to UKIP policy message, in which Nuttall announces he'll be working on the news General Election manifesto in the near future. So basically, it sounds like he's sending a a firm "I'm not going anywhere" message to his followers in the party. No mention of using his role as a Stoke-on-Trent M.P. as a base on which to build and test the new manifesto.