* The Sun newspaper visits and comes to the conclusion that:

"Inspired by Donald Trump’s unlikely win, Labour could well be ousted from the seat, which has been the party’s safest since 1950".

Most other national journalists who have visited don't seem to have stepped more than 150 yards beyond Ukip HQ and the usual faces, with The Wall Street Journal apparently spending no less than two hours on Saturday gabbing with veteran Labour supporters over tea in the Potteries Museum and Art Gallery, rather than sitting on a cold bench outside Stoke public library actually talking to Stoke's voters. Most journalists seem to be 'going through the motions', pushing out lacklustre vaguely pro-Labour articles with little real insight into the city.

The Sun newspaper did however manage to get a couple of insightful new local voices:

"barrister Tariq Mahmood, a former Labour member who has lived in Stoke all his life, told how he will vote Ukip on Thursday — and has even joined the party as a campaigner. He said: “Ten years ago it was taken for granted that every single Asian voter on a council estate would vote Labour. I certainly did."

It is not just long-term Stoke residents predicting a surprise Ukip win. On the outskirts of Hanley is the studio of ceramics designer Reiko Kaneko, who moved from London in 2012 to be nearer pottery manufacturers. The 34-year-old, who is half Japanese and produces designer items for stores including posh London shop Fortnum & Mason, said: “Lots of people I speak to here seem to be ready for that change." “They’re thinking along the same lines as the Trump fans in America — they want the products made in this country put before imports.”

Yes, in the age of podcasts you do have to wonder how far the shockwaves of the Trump win will have had a backwash in Stoke Central. Not just in terms of the crazed anti-Trump left, but also in terms of the influence of pro-Trump podcasters.

And at the end of The Sun's article a local bar manager pipes up that his family is divided between Labour and Ukip, but he comments that:

"You’ll find a lot of people who have not voted here will come out for Ukip."

It's the populist The Sun, obviously, but you have to given the journalist credit for finding and talking to some people from outside the Labour bubble.

* The Sunday Times reported today that Labour trades union bosses are battling it out for power, and one of them took the opportunity to savage another in Stoke:

"The Unite chief Len McCluskey was branded a “fat cat” who presided over a “culture of freebies and favours” as the battle to run Britain’s biggest union descended into tribal warfare. Speaking to Unite members at the Michelin works in Stoke-on-Trent, Coyne talked of: “fat cat bosses living a life of luxury at the workers’ expense. I am talking about a fat cat union boss." He then "launched a blistering attack on the 'eye-watering' £417,300 'loan' McCluskey received from Unite to buy a flat"."

* On Saturday there seems to have been no argy-bargy arising from the various pavement-pounding teams in Stoke (why do they think paper leaflets still have such power, you'd think they'd never heard of Facebook?). But later on tempers may have frayed, and a member of the Welsh Assembly claims she saw a Labour activist being aggressively shouty in a Stoke-on-Trent nosh shop: 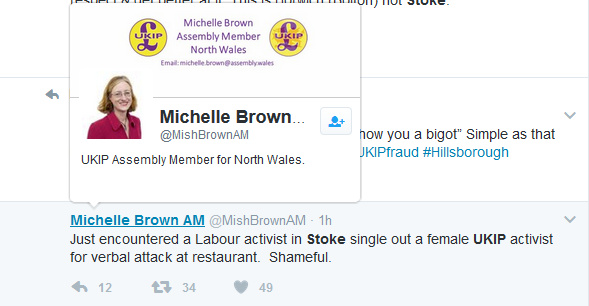 * New Labour schemer and anti-Brexit guru Peter Mandelson apparently slithers into Stoke today (Sunday), hot on the heels of his friend Tony Blair's unhinged anti-Brexit rant. If you see Mandelson around Stoke, ask him: "Labour championed the nation's switch to diesel vehicles. Around 1-in-50 of this city's people will now die an early death as a direct result of inhaling the toxic exhausts from those diesel vehicles. Would you like to say sorry to those people, on behalf of the former Labour government?"

In terms of the national politics you have to wonder if he and his mate Blair are going to be deliberately "unhelpful" via their anti-Brexit moaning, in the hope of toppling Labour in Stoke — and thus getting rid of Corbyn. A Ukip loss and national collapse would also deprive the left of a useful rhetorical enemy, leaving them without the ability to conjure up their bizarre fantasy politics which suggests to students that gangs of violent racists and neo-nazis are stalking the streets of Britain (they're not).

* I heard several curious suggestions last night that both Labour and the Lib Dems are only talking up a Ukip win in order to get their tactical voters out on polling day. Namely, to get out the new mostly young and student voters they've signed up, who think: 'we loathe Labour, but we'll vote for them to smash Nazi Ukip'. Because of the need to pander to such Ukip = Nazi delusions, it was said, Labour and the Lib Dems can't publicly admit that Ukip are "actually doing rather poorly" in the city.

I suppose Ukip "actually doing rather poorly" is possible, but it's not the impression I or many journalists get. Such a notion seems to overlook the stubbornness of Ukip's core vote, and also the determination with which Ukip and Conservative voters will show in getting to the polling stations come rain or shine. Perhaps it's a comforting false belief that's arisen among activists simply because Labour and the Lib Dems can no longer get through to the ordinary unreachable 'shy conservative' and 'unseen Ukip' voters — especially since those voters will have erected strong canvasser-blocking measures during the last week of campaigning.

Perhaps the Lib Dems' shambolic Saturday explains some of the confusion. Their blog reports that they ran out of oatcakes and bacon and then all their leafleting and canvassing went to pot. They "now have a data backlog". 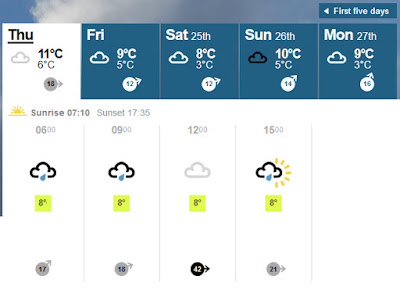