* The Express newspaper's journalists recently managed to reach Ukip's candidate Paul Nuttall for a quote, as part of what looks like a long pre-planned Ukip-motivated story about homeless ex-soldiers. This news story was published online on Monday evening, and will presumably be on the shelves of Stoke in paper form on Tuesday morning. Nuttall also attended a hustings at the Hartshill Medical Centre on Monday evening, and said a few words — but nothing about local issues:

At the same hustings he also said something about why Ukip don't have all-women shortlists. So it looks like he's sort-of back in circulation, but not yet talking about Stoke. I can't see him pounding the rainy streets of Stoke, as Snell was still doing in Shelton on Monday night in pursuit of Labour's rather minimalist and basic hope of 'getting the core vote out'.

* BBC 5 Live is in Stoke for a breakfast show today (Tuesday morning). They've apparently invited Nuttall, but who knows if he will turn up. A hastily announced hustings round the back of Hartshill is one thing, but his going live on BBC Radio prime-time seems quite another. Live radio has tripped him up before, and the BBC's left-leaning journalists are probably going to be hostile.

* I hear that BBC Newsnight is broadcasting a Wednesday evening TV programme from Stoke Central, most likely from the Regent Theatre. With an audience packed with Momentum far-left activists and students, more likely than not, as is often the case with such things. Based on Newsnight's mid February fly-by of Stoke ('sense of despair and hopelessness', 'bleak wastelands' etc etc) we can probably expect fairly stereotypical media treatment of the city.

* It's said that Conservative betting shop odds for Stoke Central can now be had at between 10/1 and 5/1, after Mrs May's visit to Stoke. 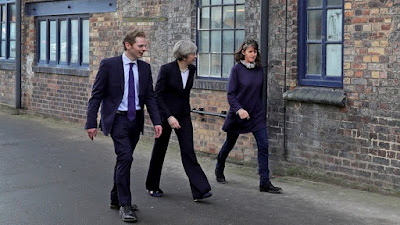 The new odds make me wish I'd been able to get a £10 50/1 bet on a few days ago, just in case. Oh well, too late now. 'Red' Ed Miliband also mooched into Stoke today, though it appears that no-one except the Labour candidate got excited:

Most of the volunteers he mentions are — according to a blog by the Lib Dem lead activist in Stoke — connected in some way with the trades unions, if not actively drawing a wage from the unions.

One of the national bookmakers has a opened a betting 'book' on the level of turnout in the Stoke election. It'll be lower than 25% I should think, but the actual result is still anyone's guess. A local university politics lecturer is reported to have rather idly mused to the press that the 6,400 postal votes (sent out, which doesn't mean they'll all be returned) could swing it for Labour. He may be right. But he was so catastrophically out-of-touch with the city's grass-roots on the General Election and Brexit votes that it's hard to take him seriously these days.

* Down in London, the Spectator reports that Tristram Hunt has settled with a sigh of relief into a plush V&A chair, and has started his new job as a museum director. I suspect he's feeling rather glad to have swapped the crusty old antiques of the Labour Party for some real ones.