By-election roundup No.11: May may call

* The Prime Minister herself has been working the phones to call up people in Stoke Central: "Theresa May hits the phones ahead of closely contested by-elections". 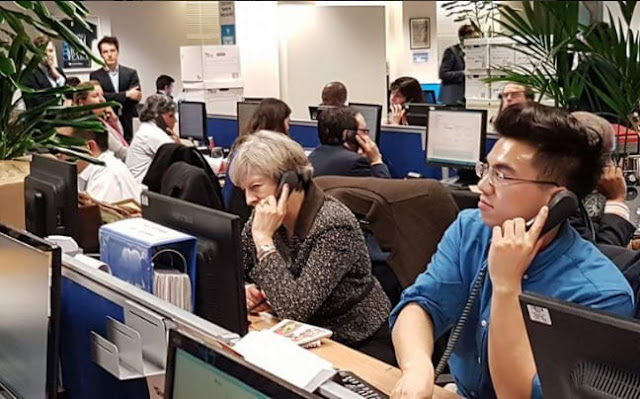 * Labour's Mirror newspaper visits Stoke for a 22nd Feb report, only to mistake the Potteries Museum for the Library:

"Outside Stoke public library stands a larger-than-life stainless steel statue of a steelworker ..."

Another minor newspaper has sent a correspondent, a local paper in Huddersfield of all places. I thought local newspapers were all totally skint these days, but obviously at least one of them can afford a night in a cheap B&B up 'anley duck. He writes:

"The column this week comes from Stoke on Trent, where I'm watching the much-hyped parliamentary byelection taking place tomorrow. Even by the no holds-barred standards of such polls - of which I have seen more than my fair share - this is a pretty vicious contest."

* The Times journalist reports that he jumped into a car with a bunch of London lefties on Sunday, and then he seems to have jumped off the deep end with the headline: "Red Tories could save Labour in Stoke". I can't get more of the story because it is pay-only.

The same pay-only problem is true of the big Stoke story by the Wall Street Journal. The journalist spent two hours chatting with leading Labour people over some stiff Bennite tea at the weekend, but still doesn't get that we're a city in the Midlands and not the North.

* Out for the count:

"After the polls close at 10pm tomorrow night, the boxes of ballot papers will be taken to the count at the Fenton Manor Sports Complex in Stoke-on-Trent."

"4am on Friday morning. But the result of the by-election could come in much earlier depending on the level of turnout and the speed of the counting process."

Let's also hope that questionable bundles of postal votes won't drag this by-election even further into the mire. Thank goodness the 2020 General Election will require Voter ID to vote, and hopefully there will also be postal voting reform by then.