Here's a quick survey, in which I search for local outdoor places which are dog-free. Don't care for un-trained manic mutts? Want to be free from constantly having to negotiate your way around dogs and their stretchy leads every fifty yards? Where can you go in the Potteries to enjoy nature, rather than endure other people's pets?

Well, in late 2014 (PDF) there was a new blanket Dog Control Order issued for all of Stoke-on-Trent, and it reportedly...

"requires owners to keep their pets on leads in all town centres, cemeteries and shopping areas in the city [and also includes] all public sports pitches and all fenced children’s play areas in the city." (Sentinel newspaper, 12th Oct 2014).

Is this blanket Order still in force? Presumably, but it seems uncertain. The Council's relevant 'green spaces' Web pages do not mention the 2014 Dog Control Order, to the extent that some might even wonder if it was still in force. A search of the Council website for "dog control order" finds nothing but years-old committee reports.

I found one old online forum comment, to the effect that that Stoke's formal Victorian parks have "long had" a "dogs on leads" stance. But I can see nothing about that on the relevant Council Web pages. Possibly a peeling and mildewed by-laws sign is still standing somewhere, un-regarded, in some of the parks? Judging by press reports of dog attacks on swans, there's certainly no 'dogs on leads' rules even at beauty spots such as Whitfield Valley Nature Reserve.

If the Stoke-on-Trent Dog Control Order is still in force, then I'm uncertain if the phrase "public sports pitches" indicates just the tightly-constrained area of the pitch itself, or if it indicates the wider recreation grounds on which the pitch sits. One has to assume that, in the case of un-fenced 'white-lines and rusty goal-posts' type of open access public pitches, the Order would logically extend to the whole of the adjacent turf on the recreation ground. Since it would be a matter of seconds for a dog to run across the turf and onto the pitch area. Presumably the Order would also apply even when a kick-about or match was not in progress.

According to my online searches of all of the parks, nature reserves, greenways and towpaths in Stoke-on-Trent and abutting areas, they all currently allow dog walking. That includes private sites such as Festival Park and Trentham Gardens (both the estate and the ticketed gardens alike — it seems such a pity that dogs are allowed in the Gardens too). The Staffordshire Moorlands' Web pages for their parks and nature reserves all just suggest that you "keep your dog under control".

Dog access is allowed at open space National Trust sites such as Downs Banks etc. It seems that North Staffordshire's large new Queen's Diamond Jubilee woodland plantations are not yet open to the public. I'm uncertain about access to local Woodland Trust woods. The Woodland Trust website returns no relevant results for "dogs" or "dogs policy". A post on their official blog however, recently seems to indicate that all their woods are open to dogs...

"Did you know it costs us £4.6m every year to keep our woods wonderful for walkies? A donation from your owner will help us carry on our four-legged fun!"

One small local exception is Apedale Country Park in Newcastle-under-Lyme, in which dogs are banned from a few wildlife paddocks (presumably these are fenced), due to wildlife disturbance concerns.

The only absolute bans I could find were a couple of sensible rural parish councils which have excluded all dogs from their children's playing fields. These being...

Most parish councils don't however have such exclusions, and of course the adjoining rural footpaths and bridleways are often used by dog-walkers.

So that seems to be the state of play. As a walker you can shut yourself in a small paddock in Apedale Country Park, or venture out to a wind-swept village playing field in Audley or Whitmore. You might find a remote Stoke cemetery where there are no local dog walkers who flout the city's Dog Control Order, although good luck with that. That's all of your options. Basically there is no escape from the barking, slobbering, wildlife-chasing, fur-shedding, shitting £10-billion tide of doggie domination. It's "love green space, love dogs"... or else bog off and do something else.

I suppose the best we can hope for now is that most of the psychotic untrained yappy 'toy dogs', mostly acquired during the Great Recession to save on dog-food, will soon die off. Hopefully people will now be more inclined to replace these with more sensible trainable intelligent breeds like collies, and will also have the cash to get them trained properly. Training as in coming to heel immediately when told, rather than trained to do amusing tricks or attack people.

A few relevant headlines from the news...

Revealed: Rising numbers of people and animals are being attacked by out-of-control dogs in Staffordshire... "A Sentinel investigation has found the number of dog attacks in Staffordshire has increased every year since 2010 to leave 584 victims."

Toddler needed lip stitched back on after dog attacked her in park in Stoke-on-Trent ... "police take no action because the pet was on a lead ... girl was feeding the ducks with her grandmother".

Blind woman's horror as her guide dog is savaged by bull mastiff at Stoke bus stop.

Two-year-old girl rushed to hospital after being mauled in the face by dog... "She was standing with her mum and a family friend in a car park. Her mother could only stand and watch as the dog attacked her daughter..."

Girl was mauled by dog... "Stoke-on-Trent Crown Court heard the dog escaped from its owner, Lee Taylor, and came across the girl who was sat on a wall chatting to friends ... she jumped over the wall into a garden. But the dog followed and began to attack." 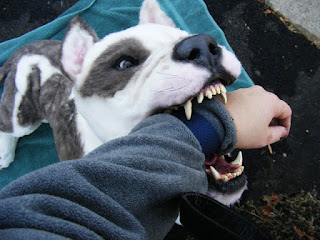