* Two senior Ukip figures have just quit, as a result of Paul Nuttall's comments on Hillsborough. They've quit on principle, but you can't help thinking that they're probably fairly sure there's another Ukip leadership election in the offing:

"Stuart Monkcom, the chairman of Ukip leader Paul Nuttall's own branch in Liverpool, and Adam Heatherington, chairman of the Merseyside regional branch, said comments made by party figures had been "upsetting and intolerable" for the victims of the families."

Still no sign of the Ukip candidate in Stoke, at nearly 3pm Monday.

"She said the Government would put an extra £10 billion of funding into the NHS by the end of this Parliament."

* Conservative odds in Stoke Central have been slashed at the bookmakers, now at 14/1:

"The Tories had been largely ignored in the betting until overnight Sunday, and early on Monday morning, when there was a sudden surge of support for them." said William Hill.

Oddly coinciding with my Sunday midnight post on this blog, hem hem. Though the weather forecast for Thursday may have helped, since a storm seems likely to favour the Conservatives whose core voters will battle through driving hail in order to vote. Whereas Labour voters, especially students, have always proven to be more fair-weather types.

* The school holidays have started today in Stoke, so some parents will likely have more time to talk with their kids about the election. Possibly it might make a slight difference to the turnout, re: having to walk small kids a mile or more to the polling station and back, on what looks like a wet and windy day? 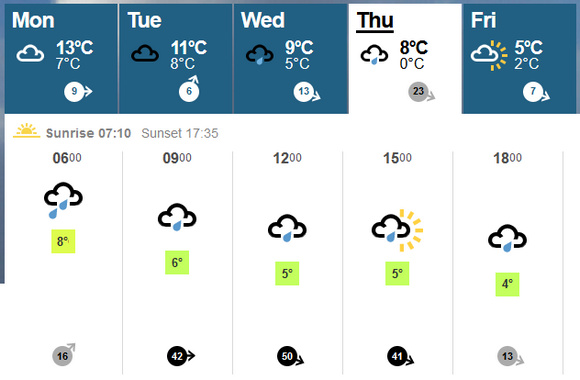