Today's by-election round-up on the last 24 hours, as the city heads into the final weekend of campaigning.

* On the Labour side, Jeremy Corbyn's campaign chief has just quit, according to the Evening Standard newspaper 'in concern at the direction the party is taking'. Not sure it makes much difference locally, although without his campaign director Corbyn seems to have been let off the leash and seems to be personally spouting to the media at every opportunity. That will get down to the difficult-to-reach parts of the grassroots in Stoke with some spin on it, via the newspapers. He'll also be in Stoke today, spouting directly.

* I hadn't realised that the Labour candidate is a paid official with a trades union. His union's website usefully pipes up about that fact, today.

* Police have warned a member of the Campaign for an English Parliament for driving a van in Stoke with the English flag on it. Seriously, how many vans are they going to have to stop now? It seems that every other white van in Stoke has such a flag on it. There are highly likely to to be even more this coming week, flying out of cars and vans across Stoke. All the police have done is boost that number, as some people will now be flying it just to say 'ya-boo to the cops'. 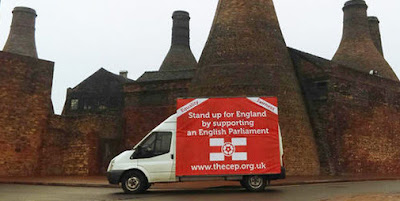 * The Sentinel newspaper seems to be effectively swinging behind Labour, with a heavy voter-influencing piece on the NHS yesterday and a smooth feature on the extreme-left film director Ken Loach today. They're also talking down the turnout with headlines anticipating a "disappointing turnout".

* Perhaps more important than The Sentinel, in terms of getting through to insulated last-minute voters, is The Daily Mail. Today they have a long and pavement-pounding article on Stoke headlined: Violence and race hate in Britain's grubbiest by-election:

"The police are now almost as busy as the candidates in what is fast-becoming the grubbiest by-election of modern times. And we still have six days to go before the voters of Stoke Central choose their new MP. Activists have been assaulted, posters have vanished or been vandalised and there have been numerous complaints of electoral misdemeanours."

The Mail's reporter has miraculously managed to track down and talk with both the Labour and Ukip candidates, both of whom are currently harder to spot than a red squirrel in Hanley Park.

* Conservative Home's 'Ukip Watch' section has some fairly sound musings on how the Ukip voters will have taken the Hillborough reporting. They write Ukip has:

"gone through media criticism over a wide variety of quite serious errors in the past and survived untarnished in the eyes of many of its supporters. Farage in particular was able to build up a following which was willing to disbelieve anything negative they might hear about him. Nuttall would like to repeat that feat. Although he isn’t as talented a communicator as his predecessor and may struggle to do so, for now he appears to be benefiting from a continued siege mentality by which core UKIPers treat most negative coverage as inherently untrustworthy or unreasonable.

In Stoke in particular, I doubt reports of Nuttall’s bogus Hillsborough claims will have a great deal of cut-through. By-election electorates live under a continuous barrage of leaflets and other materials, and many will already have made up their minds. Those switching from one party to another for the first time ever swiftly become strongly committed to their choice, too, and Labour haven’t exactly offered a great candidate to woo them back."

Yes, as someone on-the-ground in Stoke, I suspect he might be right on that. But only for the core of the city's Ukip voters. To win against the habitual Labour vote here, it seems to me that Ukip needs to woo a big chunk of the Conservative voters to make a one-off tactical vote for Ukip. The Conservatives have such as good clean candidate that it's difficult to see conservative voters going against their conscience and forcing themselves to switch, especially when it could land the city with Nuttall. So I can't see them deciding to tactically vote now, unless perhaps... if Nuttall rolls up his sleeves and is seen popping up everywhere in Stoke for the next six days. But I doubt he'd risk that, because the media and the leftists would try to ambush him on every street-corner — though his main risk so far appears to have been sitting down with small left-leaning community radio stations without first checking out their political leanings. If, on the other hand, he just hides away in Liverpool then he might keep his leadership — but he'd definitely be toast in Stoke.