By-election roundup No.13: unlucky for some

* The Guardian has just reported that the ballot boxes are being opened in the counting room in Fenton, and the count for the Stoke Central by-election is now underway. A very interesting tweet a few minutes ago from the Sky News political editor Faisal Islam (confirmed):

"Postal voting very low in Stoke - previous by elections have been won even before polling day. Not this one."

* It sounds like the workers who commute by train from Stoke may not have made it back home in time to vote:

"Rail services have been severely affected and a train was evacuated at Stoke-on-Trent railway station. West Coast services are severely disrupted. We strongly advise anyone who can postpone their journey to do so."

Fire engines were also reportedly called to Birmingham New St. at 6pm, according to tweets, so possibly there were further problems there. At least one socialist complained on Twitter they couldn't get home to Stoke in time to vote.

* The storm apparently means that a gaggle of London journalists and TV presenters and politicos may be stuck in B&B's in lovely Coventry for the night. So sad.

* Weather wise, Storm Doris only left people in Stoke with a fairly narrow window to get out of the house or workplace, in what the D-Day landings guys once called "barely tolerable conditions", if they were walking or cycling. Remember that 45% (nearly half) of all households in Stoke-on-Trent don't have access to a car, and that figure is likely even higher in much of Stoke Central. So basically for many people who don't like to do Stoke in the dark on foot, their weather window was from about 6pm-7pm. Though one especially ditzy person tweeted that they just decided to go out to vote at some random moment around 2pm, and then were somehow surprised when they came back drenched and with a new free freeze-dried hairstyle. 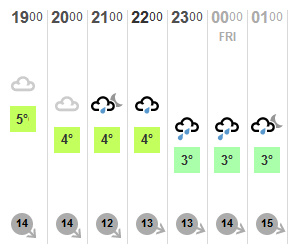 Turnout will likely be low (23-28% perhaps). Before people blame Stoke's apathy for that, remember that Doris was a major storm that killed and injured people.

Cycling to the polling stations will have been difficult in places, especially in the dusk and dark of the evening, due to a great many the fallen branches and long whippy twigs that I saw on the paths today. Some quite large branches, and some in Hanley Cemetery that were almost a third of the whole tree.

* From Cannock Chase to Barlaston "about 1,500 properties were without power in Staffordshire at around noon" due to fallen trees and branches. But no power cuts in Stoke Central.