I found an interesting discussion of the history of my allotments site, on the Web at This Is Staffordshire. I thought I'd paste the relevant bits here, just in case that page gets deleted at some point: Leeguv wrote:

"Am pretty sure it was called "Richmond Hill" before Richmond Street was laid down in late Victorian times. I accidentally came across that little factoid while doing some family history research about ten years ago. Before the street existed (prior to the late 1800s), the area (mostly fields) was called Richmond Hill. When the street name was changed from Jubilee Road to Richmond Street in the 1950s, it was no doubt a tribute to the area's historic name."

"in the past when it [the Richmond St. allotments in Stoke] was a field with a bigish pool [in the 1920s] the pool was fed by a spring which is still going in the middle of the allotments now."

I also found an old 1890 map which shows the field later used for the allotments, and the pool in it. Possibly the pool had been enlarged by the 1920s, to serve as a fishing pool. The hillside spring which fed it can still be seen at the foot of one of the allotments. The boundary between the allotments and the Richmond St. park appears to be the same today as the field boundary of 1890... 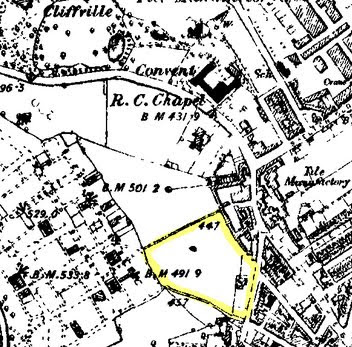 The City Council purchased the field sometime in the 1930s, presumably in the early 1930s and presumably in order to provide Depression-era allotments. In the 1940s on the allotments, Hitler tried to bomb Stoke's factories the strategically important marrow and cabbage reserves of Stoke-on-Trent. Mrs I.J. Stone told the BBC's archive of public memories of Second World War bombing...

"We had a positive shower of incendiary bombs in and around the Richmond Street allotments. The then vicar of St. Andrews was in there with me and he picked up what he thought was a sandbag and plonked it on a smouldering bomb. It was, in fact, a bag of manure and he almost gassed the whole population of Richmond St and Penkhull and the fire watchers never let him forget it."

Old photos or memories of the Richmond Street allotments site are most welcome, so please contact the Committee if you have any.
Posted by Digger at Wednesday, October 03, 2012

Email ThisBlogThis!Share to TwitterShare to FacebookShare to Pinterest
Labels: My allotment, Podcasts, Stoke-on-Trent