I made it up to my first allotment today. The intention was to measure up, put a new padlock on the little shed, and have general poke around and see what I've got. The intention of the rain was... to rain. To rain in three lengthy waves, starting just after I got to the plot. So my initial experience was spending an hour under the shelter of the apple tree. I contemplated my new 900 sq.ft. of land (a 50th of an acre), and the valley beyond, as it occasionally emerged from sheets of hillside rain-mist. Which was probably a rather good place to start from actually, as it forced some useful contemplation of the sense-of-place. 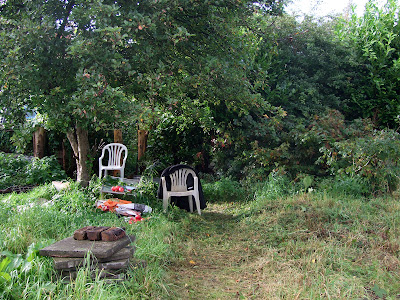 After that the sun came out, I was able to get some pictures of the freshly hosed-down plot. 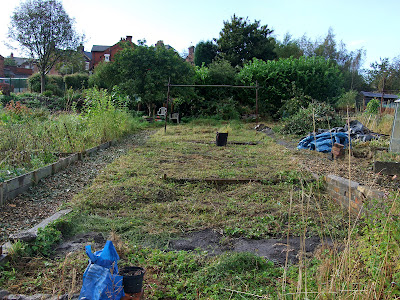 I now have access to the tiny and basic shed. I was pleased to find it has a dry-shelf, a half-decent old fork (I need to file some rust off the tines), a long hosepipe, some stiff half-hoops and netting, a full bag of compost, some antique slug pellets, bamboo canes, some little pots, some stakes and string, and space for a chair if it ever really pelts down with rain or hail. Also a nice old glass demi-john, although sadly with not a drop of delicious home-brew ginger beer inside it. A walk down the hill to Sainsbury's might cure that last situation. 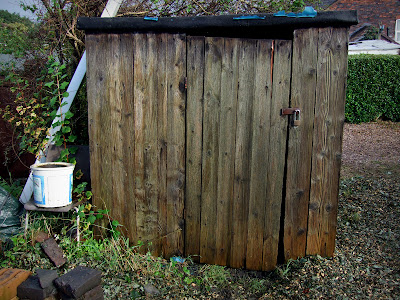 The plot space as a whole is roughly 11 foot across and runs roughly 83 foot long. The realistic cultivatable space, at least at present, is about 550 sq.ft. I'm guessing that's about a thousand spade turns! Gulp!

1 square of graph paper = 1 square foot.
I was pleased to find two struggling currant bushes, up at the top. But they're being swamped by the hedge and brambles and so they'll have to be moved down at some point. 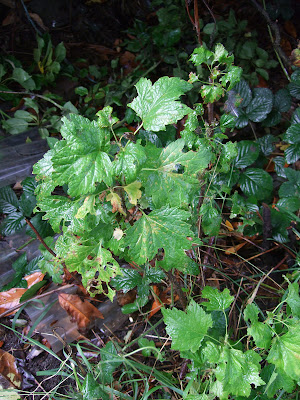 Near the currants were two scrawny stands of rhubarb, being swamped by grass and brambles. That means I can stake out where they are ready for next year, and then with a bit of luck I can pull a crop from them next year. 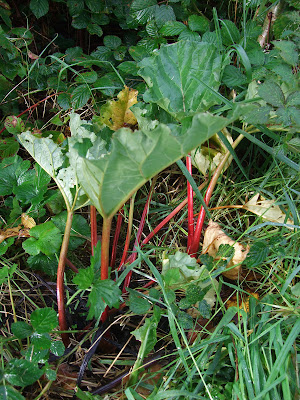 There's a row of old garlic in the middle of the plot, which has been chopped along with all the weeds. I'm not sure it's worth keeping. I'll harvest it this week and then plant fresh stiffneck garlic this winter, I think. Also up at the top is a cute little baby oak tree, which is going to have to be cherished! 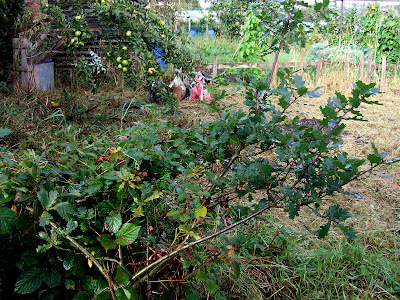 Oh, and I met the friendly neighborhood robin, too. I'm hoping he'll come and perch photogenically on a spade-end for me at some point soon.
Posted by Digger at Monday, October 01, 2012