"As her graduation project Anne Geene decided to execute a systematic, almost scientific, study of her allotment in Rotterdam [Holland]. The book contains three parts. It starts with the geographical demarcation, the lay-out of the allotment and some facts and figures, like the most common weed (goutweed) and most common species (the woodlouse). Part two is the main part of the book and provides a detailed account of all her observations. She not only documented and photographed all the vegetation and species that occupy the allotment, but she also included different shapes, colors, patterns, animal behavior, animal traces, skies and water. The third and final part presents the results of various measurements like the transparency of leaves, the speed of swimming ducks or to what extent the camouflage of a frog resembles its surroundings."

The work has now been published as a book (in Dutch only), Plot No. 235. Encyclopedia of an Allotment... 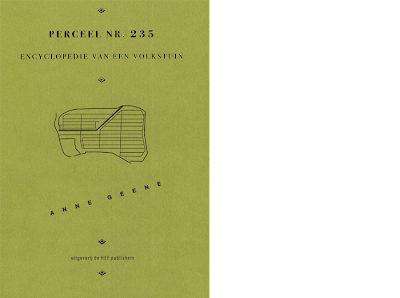