The Independent has a news story today, claiming that there are now "too many" new beehives, at least in London. In the capital a beehive has become the oh-so-fashionable thing for the upper middle-class garden, and also for the office roof at some large businesses. Yet there simply isn't enough pollen and nectar in the urban metropolis to support them all. Thankfully that's not a problem that should affect bees in Stoke-on-Trent, since the city is nestled amid a vast patchwork of green spaces. On a more national level, the news report also worryingly mentions a...

"survey by Mori [UK] last week showed that nine out of 10 people could not identify honey bees next to other insects."

I guess that's partly an inevitable result of that fact that 49% of UK children are simply not allowed to play outside. But it suggests that those with new beehives might want to have an actual picture of a bee on the initial publicity banners and leaflets, when the hives arrive. 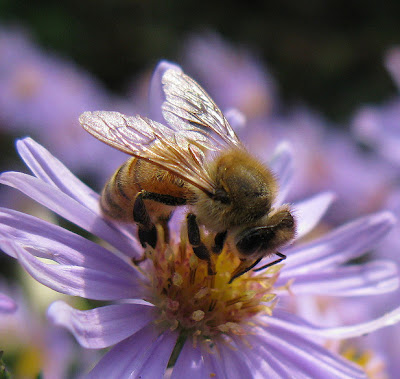 Above: Honey Bee by Tie Guy II. Creative Commons.
Of course, in future we may have robo-bees...

"Engineers from the universities of Sheffield and Sussex are planning on scanning the brains of bees and uploading them into autonomous flying robots that will then fly and act like the real thing."