Ninth day on the allotment

Weather at the plot today: 11 degrees at 2.50pm, 11 degrees at 5.30pm. Very pleasant in the sun as the storm finally passed away north, and the wind dropped, but then feeling colder as the wind picked up about 4.30pm. Ground damp, from the rain of the previous 24 hours. Another afternoon at the plot. I've now dug and weeded nearly all of the lower section of the plot... 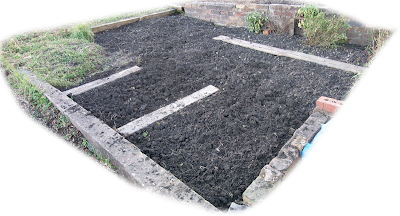 One more afternoon, and the lower section should be done... and six green garden sacks of weeds and weed roots will have been taken out of it.

I met "Mr. Euro" for the first time, and he kindly gave me three nice-looking Bramley cooking-apples. He's an Oxbridge-voiced bloke situated two plots north of me, where he flies a very tattered little European EU flag. I also met a nice couple who took over a disused plot next to the Park, back in July, cleaned it up, and who are now enjoying taking their bags of Autumn produce off it.

Worrying report in today's paper. A woman's smallholding at Sneyd Green (a long way from my allotment, at the back-end of Burslem) was broken into and all her geese and chickens were killed and taken, seemingly with intent to sell them on a market (the birds were found cached in a nearby field). Thankfully, my site has just changed all the gate padlock combinations, but such things are still worrying.
Posted by Digger at Tuesday, October 16, 2012