Getting an allotment has reminded me of my youthful chuckling at the TV series The Good Life, many years ago now. The Good Life was one of the many popular sitcoms of mid and later 1970s, a time long before the Internet when there were only two TV channels to choose from for comedy, ITV or BBC. The BBC's The Good Life featured an urban couple who turn their front and back gardens into allotments, in a bid for self-sufficiency in food. I vaguely remember watching the series as a young child, and think I must have watched the whole run. But it ran from 1975 to 1978, and so I would have been too young to get all the jokes in the earlier series. The Margo character has always been the most vivid in my memory. 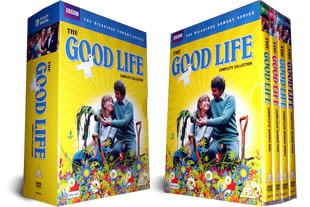 The historical context of the show was that UK in the 1974-1979 period was collapsing under socialist rule — power-cuts / waves of strikes / food shortages / rampant inflation and more — and this was a situation which also inspired everything from sitcoms like Citizen Smith (a hapless wannabe leftist revolutionary), to the biting drama series 1990 (the grim portrayal of an investigative journalist trying to live under a future socialist dictatorship in Britain). Against this grim background, the rather twee presentation of the suburban self-sufficient dream certainly must have appealed to a wide TV audience. Even The Queen was apparently a big fan, at least according to Wikipedia. I may have seen a few repeats in the 1980s, although I don't remember them. So I'm now looking forward to another viewing of the show. Many 1970s sitcoms have aged badly (Are You Being Served?) while others have become timeless classics (Open All Hours springs to mind) and I'm just hoping that The Good Life will live up to my old memories of it. Judging from YouTube clips like this, it probably will...
Posted by Digger at Friday, October 05, 2012

Email ThisBlogThis!Share to TwitterShare to FacebookShare to Pinterest
Labels: Goodies and gadgets