The UK's venerable The Spectator has dropped its paywall for one month, revealing some munchable and entertaining articles on allotments: Seeds of Change (on science and modern techniques on allotments) My Secret Garden (on the 'secret garden' nature of allotments) Thin On The Ground (on the threats to allotments under Labour) Digging the dirt (on Labour's facile evocation of 'Dig for Victory', at a time when Labour had been allowing the sell off of allotments for a decade) Talking Heads (on allotment holders in winter) Growing Your Own (on the costs of cultivating vs. buying veg) A Place to Plot on the perfect writer's shed...

"The sheds I see online are all roughly constructed out of orangey-pine and look like doll’s chalets, with horrible black cladding on the roofs and blank-faced, plasticky windows, that look as if they should be toll booths or housing hot tubs or a kennel for Alsatians, or some other grim purpose."

Round The Galleries (review of the gallery show "A Common Treasury: The Sheds Lost to the Olympiad"). 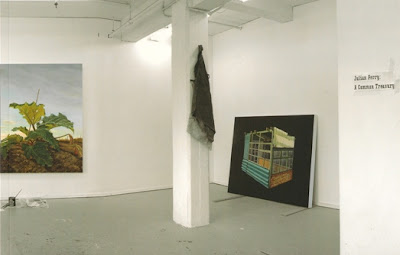 "A Common Treasury: The Sheds Lost to the Olympiad", Austin/Desmond Fine Art, London, Sept 2007.
Posted by Digger at Monday, October 08, 2012