Up The Garden Path

One of the oddest gardening-related publications ever to come out of Stoke was a Dungeons and Dragons role-playing adventure booklet called "Up The Garden Path". Issued in a tiny print-run for the 1986 Stoke-on-Trent National Garden Festival, it was only sold at the Festival and at the Royal Horticultural Society Hall in London. Which means it's incredibly rare, and now sells to collectors for about $2,500. RPG travellers journeyed to the Festival site on a salamander-driven steam train run by gnomes, and then used the real site-map as a game map. In an Alice-like world they encountered monsters including an IffanbutT, Shadow Wolves, the Arborinexorabilaneous treants (living trees, or ents), and the Snap Dragon. A scan of the booklet is currently available to read on Scribd. 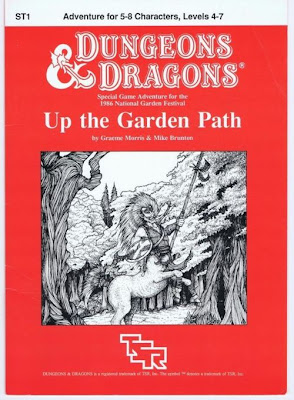